Before I Sputter Out

Had this song stuck in my head for a while, and for some reason I had the urge to post it to the blog, so here you go.

Posted by Big Anklevich at 11:07 AM No comments:

My son got these sticky gel letters to put on his door at Halloween. We got them from the dollar store. Let me just give you a little warning if you see them this upcoming Halloween and are considering buying them. They bleed. 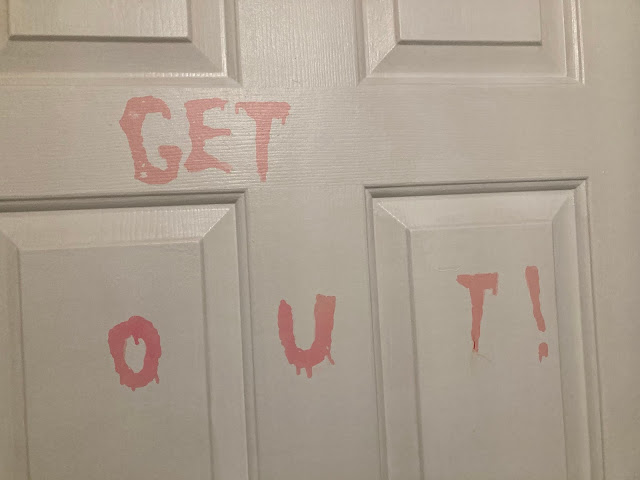 I mean, yeah, they're meant to look like words scrawled in blood, but that's not what I'm talking about.

We peeled the letters off back in November, but the words remained. The color bled out of the gel and onto the wall.

Now, here we are in April, and it's still there. We're going to have to repaint if we ever want it to come off.

It's cool at Halloween time, but having "Get out!" scrawled in blood didn't make for a particularly good Easter decoration.

Posted by Big Anklevich at 9:19 AM No comments:

It's wildflower season in Texas again, and they are everywhere, on the side of every road. 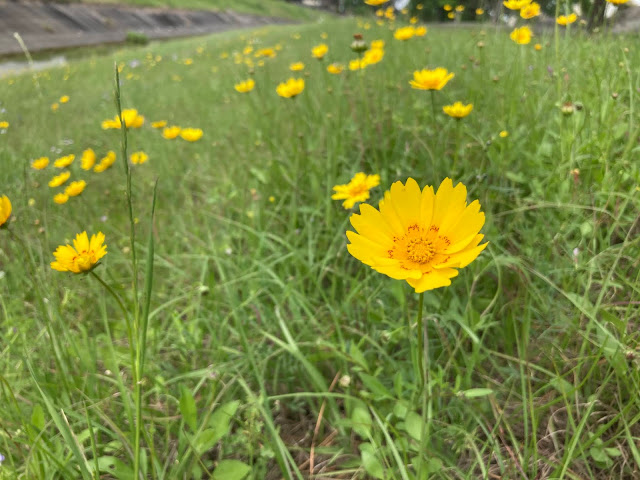 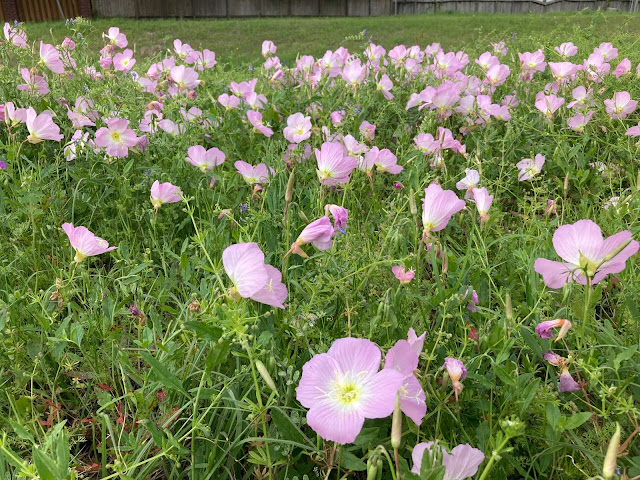 These are pictures of the wildflowers growing beside the drainage canal where I go for my walk each day. 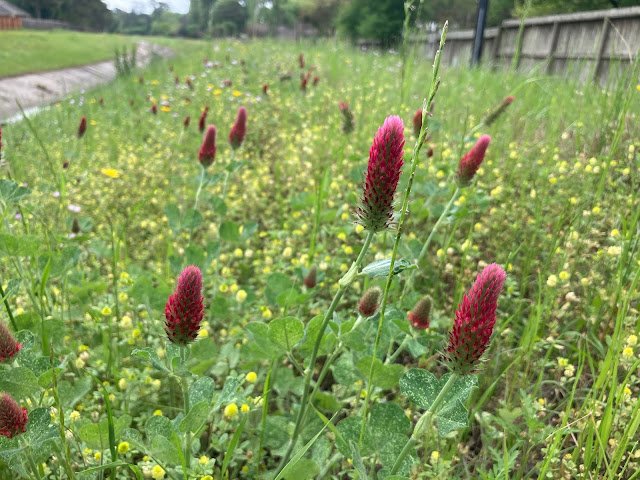 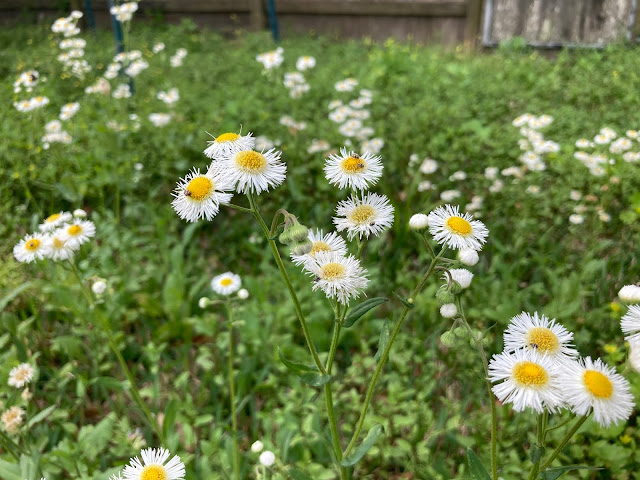 The funny thing is that the pictures just don't do them justice. I find myself unable to capture the absolute riot of color growing around me. 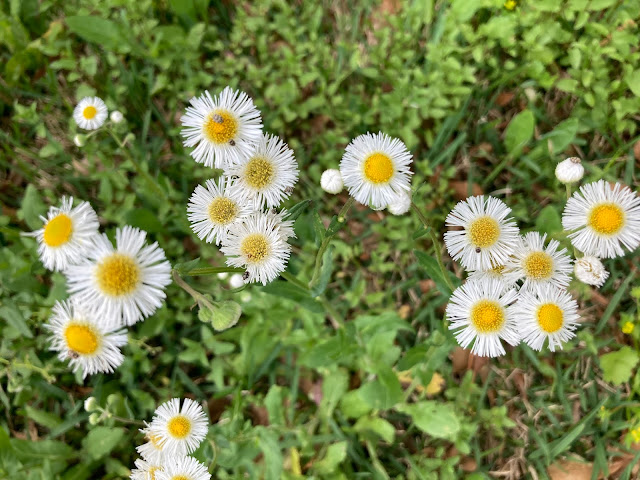 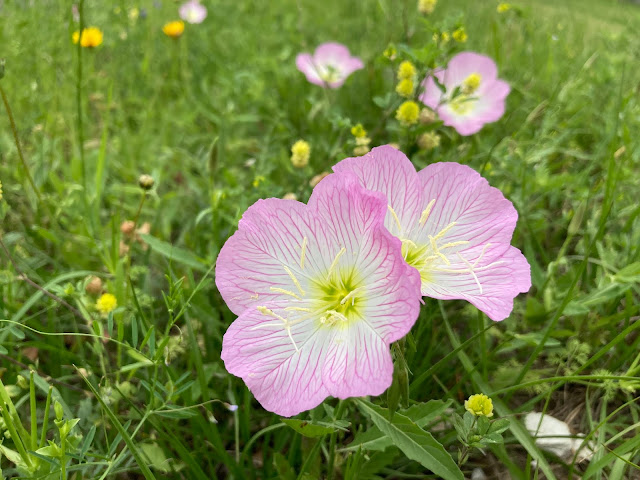 Notice all those tiny little specks of yellow or white or purple in the background of some of the pictures. Every one of those is another flower. It's simply amazing. 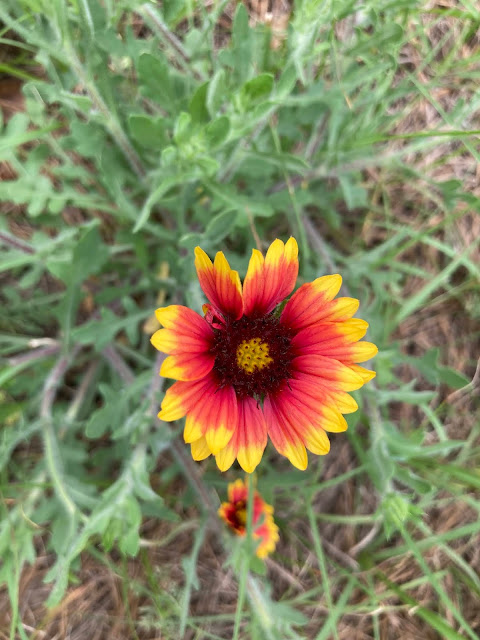 This one below is probably my favorite pic of the bunch. I love the bee perched on the flower. I took two pictures at this moment, and the bee was at the best angle in this one. 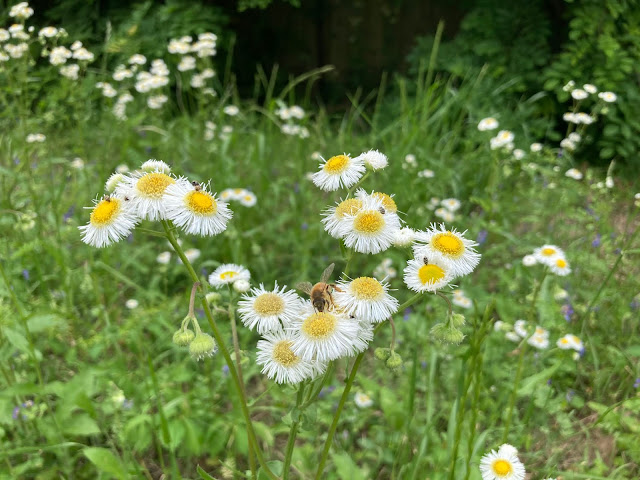 It was interesting to see my old friends the thistles. I used to see a lot of those back when I lived in the desert, but I didn't expect to see them here with so much moisture around. They're a spiny, horrifying plant, but I still like the flower they produce. 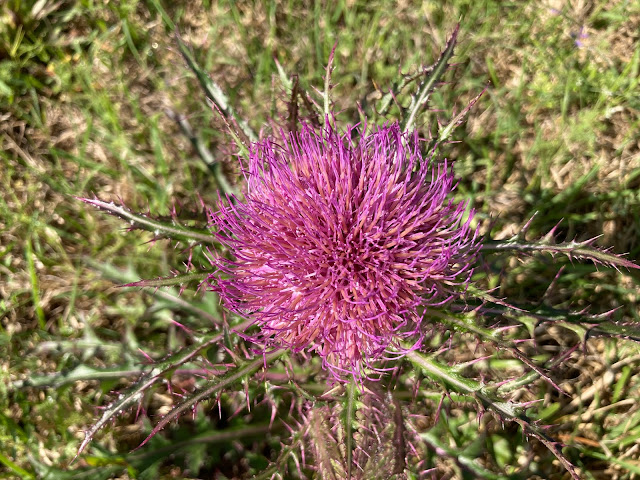 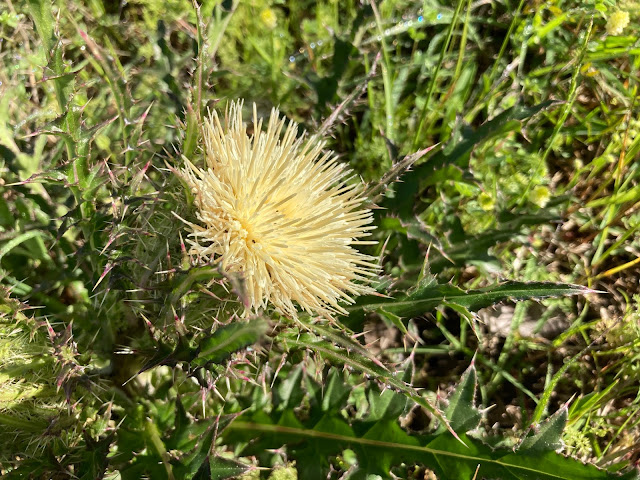 Sadly, I am yet to be able to get a picture of the state flower, the bluebonnet. I've seen tons of them, but there aren't any growing where I go walking. I'd have to stop on the side of the freeway to get pictures, and if you've ever been on the side of a Houston freeway, you'd know why I do not dare.

It's a tradition among many folks in Texas to find a big meadow filled with bluebonnets to take family pictures and pictures of their kids etc. I guess I'm not a real Texan yet, because we still haven't done that yet. Though, I still have time. Maybe I should try to fit it in this month...

PS- I had a typo the first time I wrote bluebonnets above. I accidentally spelled it bludbonnets. BLUDBONNETS! Now that is a good name! Sounds like the name of a great period horror piece. My mind is actually churning to come up with some kind of story to go with the name. If nothing else, it would be a good name for the red flowers I got pictures of, kind of the anti-bluebonnets. 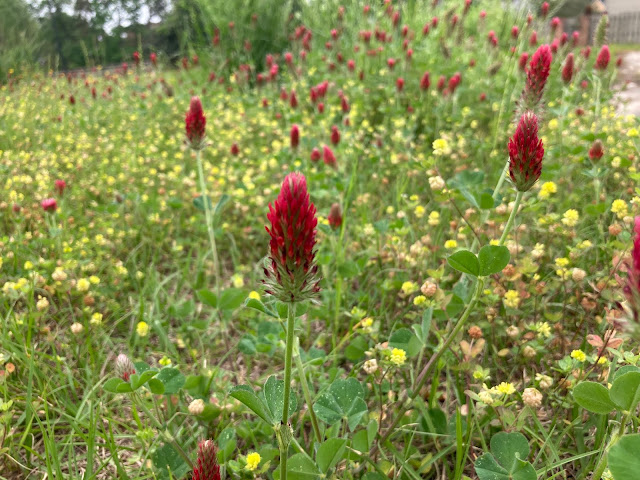 Posted by Big Anklevich at 8:44 AM No comments:

I suppose it's a little late for this...no longer March or anything, but we went camping this past weekend, and one of the guys I was with found a four-leaf clover. 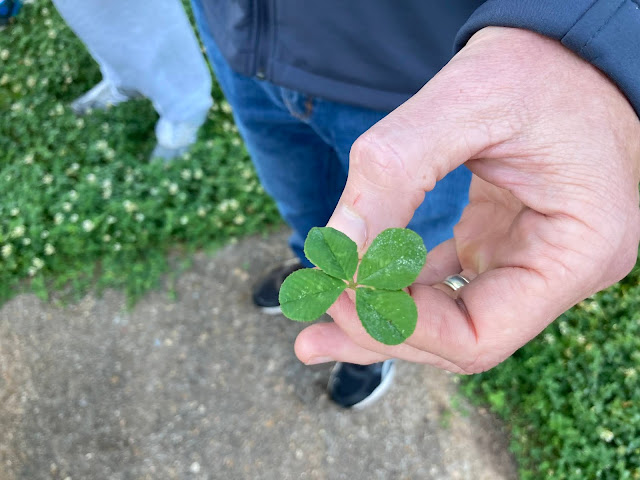 I've heard people say that they are not real, but this is the second person I've personally seen find a four-leaf clover now. My best friend in grade school did as well. Before, I could only give my witness statement of the actual existence of four-leaf clovers. Now I have photo evidence to go along with it.

Of course, I'm sure if I searched on Google, there'd be hundreds of other pictures...but this is still worth it, because I couldn't vouch for those pics.

Posted by Big Anklevich at 9:33 AM No comments:

Anklecast 45: Party Girl and the Great Texas Arctic Blast Freeze Out of 2021

It's another episode of the Anklecast. I'm going to do one every month, and, well...I barely made it in time, but here we are.

Today's story is "Party Girl." It's one that I wrote just last year as I was working my way towards 300,000 words.

After the story, I made a sort of vlog of my experiences in the Arctic Blast that froze Texas last week. It was an interesting month for sure, especially that week. If you're interested in that stuff, stick around after the story to hear all about it.

Anyhow, here's the Anklecast. No schmutz on the lens this time either!

Or, you could just listen to the audio of the episode here, but I think you might miss out a little on the snow video.

You can download it HERE by right-clicking and choosing "save target".

Or feel free to subscribe to the podcast feed by clicking the button over on the right hand side.

I swore I was going to do it. You didn't think I would. In fact, you warned me not to, but I did it anyways. I made another episode of the Anklecast.

Today's story is "Active Shooter Training." Oh, and I also threw in a little bitty story as an appetizer called "Date Night."

After the stories, I talk a little bit about my goals for the year. I suppose I really ought to do a post where I put them out for all to see and hold me accountable. I guess, watch for that.

Anyhow, here's the Anklecast. The video is really blurry, because there was some kind of schmutz on the lens. I decided that I would just post it as is, because re-doing the episode might take me too long, and it's better to have something rather than nothing. I'll be sure to wipe off any schmutz next time.

Or, if you hate my face...and the blurry picture, you could just listen to the audio of the episode here.

You can download it HERE by right-clicking and choosing "save target".

Or feel free to subscribe to the podcast feed by clicking the button over on the right hand side.

Over on Facebook, Marshal reposted a call for people to put their favorite pictures of nature up as a way to combat all of the negativity that we were seeing there instead. Rish reposted it too, and so did I. I really like nature, after all. I much prefer it to negativity.

Then, the other day while I was doing my daily 45 minute walk for #75Hard, I thought it would be a good idea to bring my nice camera with the long zoom lens on my walk and take some pictures of all of the beautiful songbirds that flitted around me as I made my way down the trail.

Of course, each day I forgot to bring my camera with me, and would only remember when the first bird swooped down and parked in front of me. Oh! This would be the perfect time to have that camera!

Today, I finally remembered to bring it. It's big and bulky, and kind of a pain to carry around. Worse yet, today was a very overcast day. I don't know if the clouds had something to do with it, but there seemed to be drastically reduced bird activity.

Also, every single person walking the trails had a dog at their side. I'm sure birds give dogs a wide berth. I even managed to get stuck walking my usual route just about a hundred yards behind someone with a little white dog. I never saw a bird the whole time he was in front of me. I was so glad when he finally turned right when I had to turn left.

Anyhow, I don't have very many pictures to show off from my effort. I found this cardinal very early on in my walk: 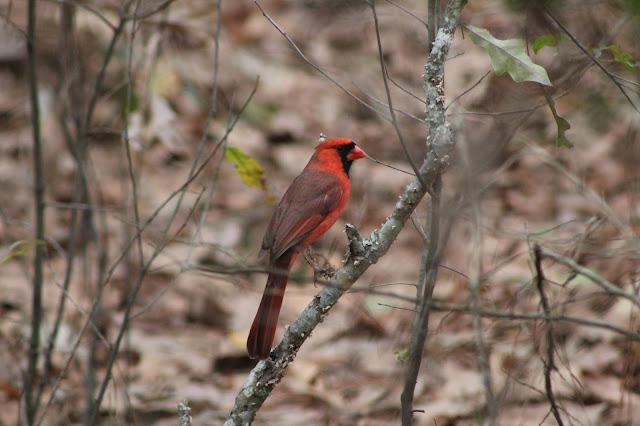 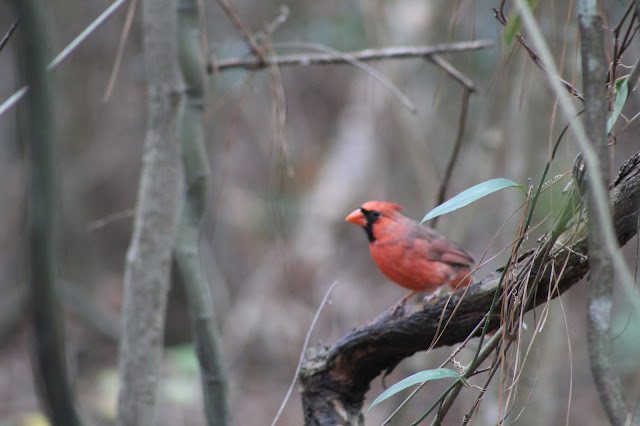 I am, admittedly, not very good at this photography thing. Sometimes I think I wasted my money getting that fancy zoom lens camera.

My one other picture I managed wasn't even of a bird, but rather a squirrel. 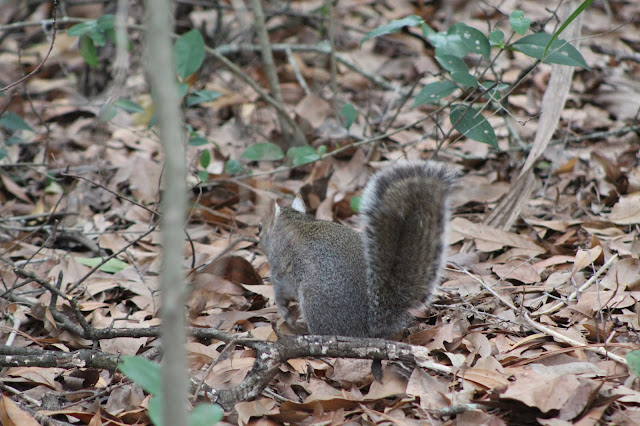 I don't know if you can tell, but that is a winter squirrel. He (or she, don't ask me how you can tell) was feasting all autumn, and now he (or she) is ready to pass the lean winter months

Posted by Big Anklevich at 10:08 AM No comments: