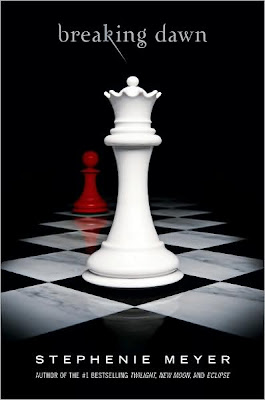 A couple of years ago, my wife, like many women in America, became a fan of the Twilight series by Stephenie Meyer. I was still clueless, at this time, about this whole phenomenon. There hadn't been movies yet, in fact the movies were still just rumored. My wife read them, and loved them so much that she begged me to read them as well, so that we could discuss them.

Luckily for me, the library had them in audio, and I listened my way through the three books that existed at the time. They were very much written for women. I would not have been surprised to see a white-skinned Fabio gracing the covers of these books. To my dismay, the discussion that my wife and I had afterwards went something like this:

"What did you think?"

"Meh, they were all right."

And that was it.

I probably should have quit then and there, but I'm just not that smart. So when the library's audio copy of Breaking Dawn became available, I checked it out, and listened to it. Like its predecessors, it was very, very female oriented, and very much a romance book in disguise as a fantasy/horror novel. There were a lot of times where I found myself simply gagging as Meyer waxed on and on about how wonderful Edward Cullen was, or how wonderful it was to be married to Edward Cullen, or how wonderful...URK...sorry, I just threw up a little in my mouth there. Give me a minute to go get a drink, I'll be right back.

Sorry about that. I'm doing okay now. Anyway, if Meyer could have refrained from overly romance-booking the story, it could have been an interesting and legitimate fantasy novel. There were ideas in it that were interesting, if not exactly groundbreaking. Unfortunately, the packaging made the contents too undesirable for me.

Worst of all, when I finished, my wife and I talked about it. She'd been waiting a year for me to finally get around to listening to that book after all. The conversation went something like this:

"What did you think?"

If only I'd learned from the first time.

Guys, avoid these books. Girls, enjoy them. See you next time.
Posted by Big Anklevich at 2:21 PM 5 comments: 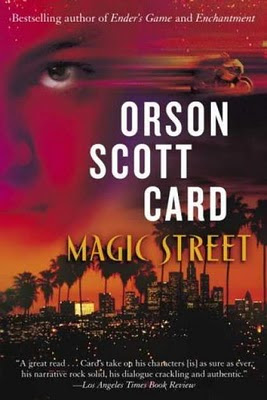 My trip to my local library a while back yeilded a few audio books for me to check out. They weren't part of my whole Science Fiction Reading Project, but I'm grandfathering them in (I suppose that you can't really use that term that way, but I don't care, I'm doing it all the same).

Magic Street is a book by Orson Scott Card that I'd previously never heard of. I've been a fan of Card since I first read Ender's Game back in tenth grade. Since then, I've read the rest of the original Ender quartet. I really enjoyed those books. Then I read the Shadow quartet. Those weren't quite as good. I've also read all the Alvin Maker books, all the Homecoming books, and even some of his standalone novels like Pastwatch, A Planet Called Treason, Hart's Hope, Wyrms, Lost Boys, Treasure Box, and Enchantment. It's probably the most books by a single author that I've read.

Unfortunately, in my mind, his writing has slipped in recent years. Like Stephen King, whose writing was sharp and fast-paced in his early years, Card has fallen off as he's gotten older, and his stories have become bloated and uninteresting. This new book by Card, Magic Street, is no different. It just moved too slowly for it to be very interesting at all. But aside from that, the story, idea behind it all, just didn't catch my attention, it didn't speak to me. The book is a modern fantasy, involving a fairyland that is superimposed over our own world, and incorporating many of the characters from William Shakespeare's A Midsummer Night's Dream. All in all it was just too silly for me to take seriously. It was meant to be serious, though. It wasn't a comedy. I think I might be too old for this book, although I don't think it was aimed particularly at younger readers.

In his author's note at the end of the tale, he said that he wrote the book with all black main characters after having been challenged by a friend to do so. His friend was disappointed that black people don't get their equal time in literature. For the percentage of the population that they represent, they don't get a similar percentage of starring roles in books. Card begged to be allowed off the hook, because he's not black, and any attempt that he might make to portray a black character would come up wanting. In the end, however, he went for it. His portrayal of black culture seemed genuine to this pasty white guy anyway. He seemed to have succeeded. I'm sure black people who read the story, however, surely found things that didn't seem quite genuine. Who knows?

But I wonder if the fact that this book was so black-centric was why I didn't like it. It didn't speak to me like many of Card's other works have. Am I a racist? I don't think I am, but I guess there's something to be said about having a book targeted at you. When it's written for a certain piece of the population, like blacks, then they are more likely to enjoy it. I guess Card's friend was right when he said there needs to be more black main characters in fiction. If I were a black man, I might be less inclined to read books, just because the characters never resemble me in any way.

Anyway, I made it through the whole book, but I couldn't really recommend it to anyone. If you want to read a good book by Card, then read Pastwatch, or the original Ender series. Those are some really good books. Magic Street just wasn't fun like I wanted it to be. I guess you can't win them all, and even someone's favorite author doesn't always please. Then again, if you're black, this book might be right up your alley.
Posted by Big Anklevich at 12:38 PM 2 comments:

My five-year-old is about to become a six-year-old. The other day during dinner she told us what she most wanted in the world for her birthday present.

I didn't have the heart to break it to her that those things might exist in the cartoons that she watches, but not in the real world yet. Roombas notwithstanding.

My other older children had no such compunctions.

"I don't think there is a robot like that," They said.

"Well," said my five-year-old going on six, unperturbed, "Whatever you can get me. It just has to be a clean-bot."

Now I know what to shop for I guess. Do they have one of those ASIMO robots programmed to clean up My Little Pony and Littlest Pet Shop figures yet? 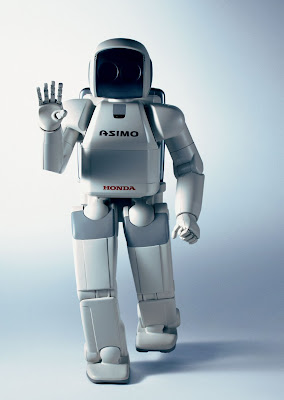