The other day, my wife ordered some doorknobs for our house. She hates the doorknobs the house came with. They're all gold, and she despises it. I do too, truthfully, so for once I'm all for the wasted money that replacing perfectly good doorknobs entails. The gold ones are pretty ugly. Anyway, she ordered four doorknobs. Today, they came. We couldn't figure out what might be in the box when it arrived though. Look at this thing: 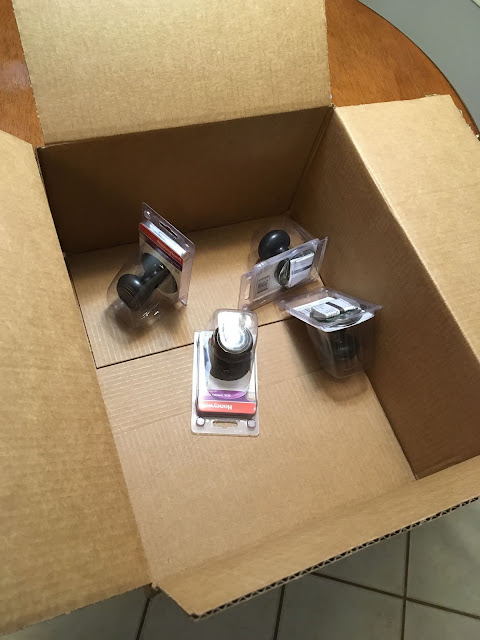 That box is freaking huge! Four little doorknobs came in a box almost big enough to fit a whole door! They also came just like this, no padding or puffy stuff at all. That must have been one of the most rattling packages ever. Anyway, it was silly, so I had to share.

Oh, anybody know a good way to install a doorknob? How the hell do you screw it in? The knob blocks the path to the screw. Is there some kind of special tool? I think my wife already stripped one of the screws attempting to put the knob on my son's closet door. Now what?
Posted by Big Anklevich at 8:35 AM No comments:

In case you didn't hear, episode 205 of the Dunesteef Audio Fiction Magazine has dropped. Head over to the Dunesteef.com and check it out. It's good stuff. 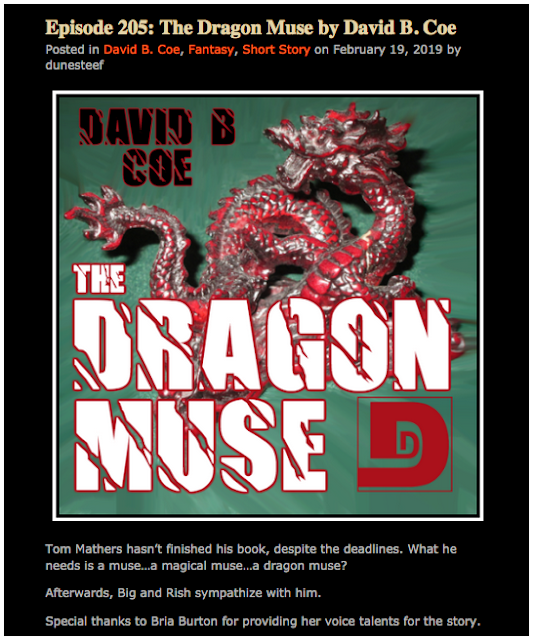 Or subscribe to our podcast on your favorite podcast app thing.
Posted by Big Anklevich at 1:51 PM No comments:

Here's my newest video, just released this week. It's part two of the bounty hunting hunt.

Posted by Big Anklevich at 1:44 PM No comments:

Happy V-Day of Is It VE-Day?

Posted by Big Anklevich at 10:44 AM No comments:

Posted by Big Anklevich at 10:46 AM No comments:

They're Grrrrrr...what the heck is that on that box? 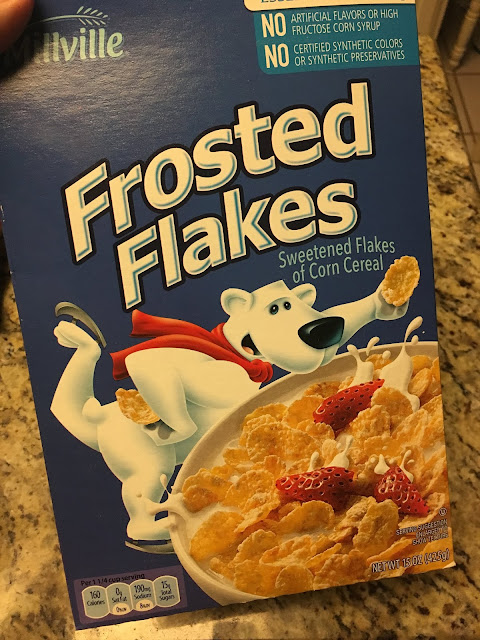 I guess Frosted Flakes isn't a trademarked name anymore and anyone can use it, because they had this cereal at Aldi and it wasn't by Kellog. Maybe it's such an old brand that it's protected status has run out and it can't be copyrighted anymore. That is a thing right? Are Frosted Flakes in the public domain? Weird.
Posted by Big Anklevich at 7:33 AM 1 comment:

Posted by Big Anklevich at 1:00 AM No comments:

Confluence of Good and Evil

Rish's head will explode if he watches this video, I think. For some reason, he has an undying hatred of Led Zeppelin, specifically one of their most famous songs, "The Immmigrant Song." But he loves the classic 1980s cartoon Transformers franchise, and specifically the movie that came out in 1986. So, I wonder what happens when you put the two together like this:

This is a band that calls itself Cybertronic Spree. I don't get the name completely. I mean, I know Cybertron: 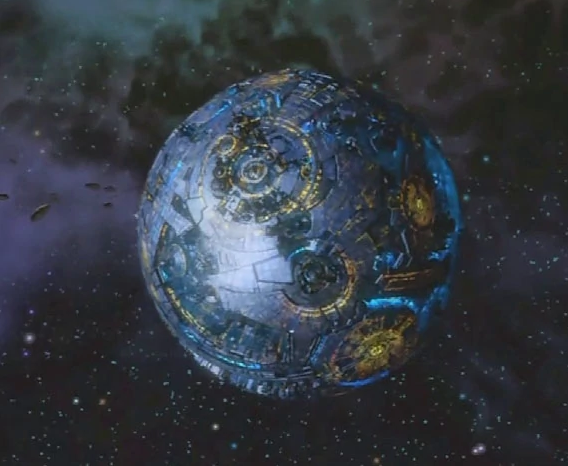 And I know Sprees: 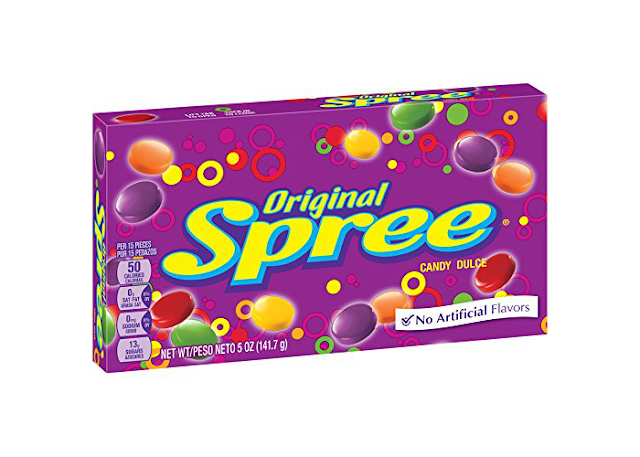 I was always especially fond of the Chewy Sprees back when I could eat candy without calling it attempted murder. 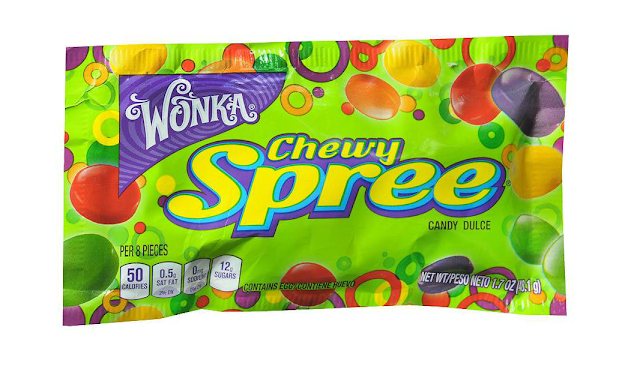 But I don't know the reference that brings those two words, Cybertronic Spree, together into the name of this band. But that's not really important, I suppose. I mean, why is Def Leppard called Def Leppard, and why spell it so atrociously...on top of that, why did the the word def become a term synonymous with hip-hop when it was first made famous by an '80s hair band?

Anyhow, that Cybertronic Spree performance of "The Immigrant Song" popped up on my feed this week, and I couldn't help but share it. Cybertronic Spree are so great. I've been aware of them for a while, but I've never shared on here about them, and I should have. I have been remiss. Forgive me.

Also, it was a chance to make Rish's head explode. I just hope he was recording one of those ultra-shitty YouTube reaction videos when it did, so there's some sort of documentation. Now, as an olive branch, here's some videos that should cause his head to spontaneously reform and probably make it better than new. Cybertronic Spree started out their careers as a band that played the soundtrack to the 1986 Transformers movie. So, here's a few highlights of their portfolio.

I have to admit that I love these guys. There's a few bands out there where their image and presentation has meant more than their actual music, KISS and GWAR immediately come to mind. But none of them are as rad as these guys. I love the choices they made on who to include in the band. First we've got Hot Rod and Arcee, who are great, but then they have Unicron and a friggin' Quintesson. That guy in the Quintesson costume may be the only guy in history who has ever cosplayed that character.

Sometimes they have Rumble on the drums, and sometimes it's Shockwave. I assume that's the same guy, but in a different outfit...or did they have to replace the drummer? Band members being replaced is a pretty common thing in rock music.

Sometimes I catch glimpses of Bumblebee and Soundwave, but they seem to be something other than a regular band member...like a backup dancer or something.

To top it off, they've got that guy in a yellow hard hat playing Spike Witwicky. It's the easiest costume of the bunch, but for some reason it seems the most brilliant. Why was Spike...and, in the original cartoon before they jumped forward to the far future world of 2005, Spike's dad Sparkplug...always wearing a hard hat? I can understand it when they're on the job at the oil drilling platform, but most of the time they weren't. Is it just like the Man In Black from The Princess Bride who wears his mask not because he was "burned by acid or something like that", but because, "they're terribly comfortable" and he feels that "everyone will be wearing them in the future"?

The one thing Cybertronic Spree needs to do someday is have Unicron dress up as a different character, maybe Galvetron to keep with the theme, and get a gigantic stage set of an animatronic Unicron that they can use like Iron Maiden has been doing for years with their mascot, Eddie. 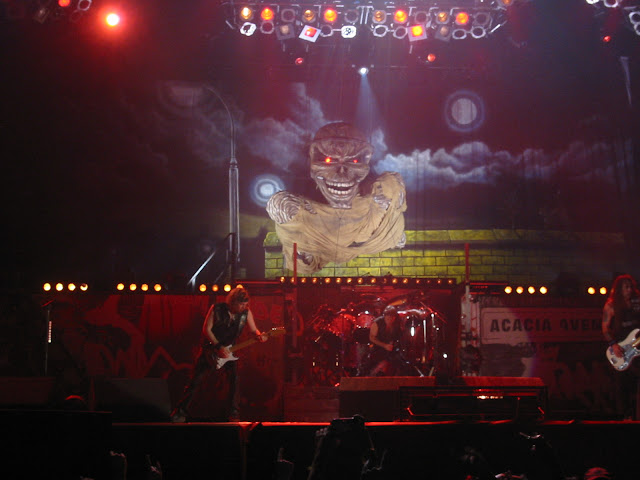 Check out this video to get a better idea of what I mean (skip to about 3:00 in).

Otherwise, Unicron is pretty out of scale, and no toy collector can be happy with scale problems.
Posted by Big Anklevich at 11:02 AM No comments:

Posted by Big Anklevich at 10:50 AM No comments:

That Gets My Glass

If you haven't checked it out yet, Rish and I went to see the latest M. Night Shyamalan movie called "Glass". Then, we got together afterward to talk about what we thought. 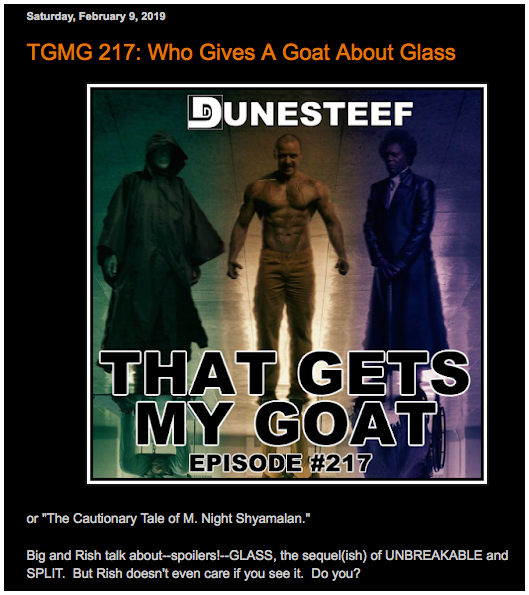 Check out the show over at the Dunesteef.

Posted by Big Anklevich at 10:02 AM No comments:

Hasbro has made it possible to collect all six bounty hunters, and I couldn't resist. Here's part one of my bounty hunter collection review. Check it out if you're so inclined.

Posted by Big Anklevich at 4:37 PM No comments:

Here are the best pictures from my most recent video about the Inhumans, Black Bolt and Medusa. If you haven’t seen it yet, check it out by following the link in my profile. marvel #hasbro #actionfigures #theinhumans #actionfigurephotography #toys #toycollector #inhumans #toycollecting #marvellegends #blackbolt #medusa #medusamarvel #mcu #marvelcinematicuniverse

Posted by Big Anklevich at 10:54 AM No comments:

I've been doing big crazy displays for the major holidays in fall/winter. You can see my blog post about my Halloween and Christmas displays here on the blog.

After what they refer to as "the holiday season" passes, however, there's not a lot to do for decoration. I don't really have anything for January's holiday, Martin Luther King, Jr. Day. February has Presidents Day, and I do have something that I could put up for that, surprisingly. A few years ago they were producing Pez dispensers of all the US presidents. I only ever saw the box that had the first five presidents, but I happened to be a Pez addict at the time, so I bought them. Perfect Presidents Day decorations...not that many people will even notice them hiding on the shelf. 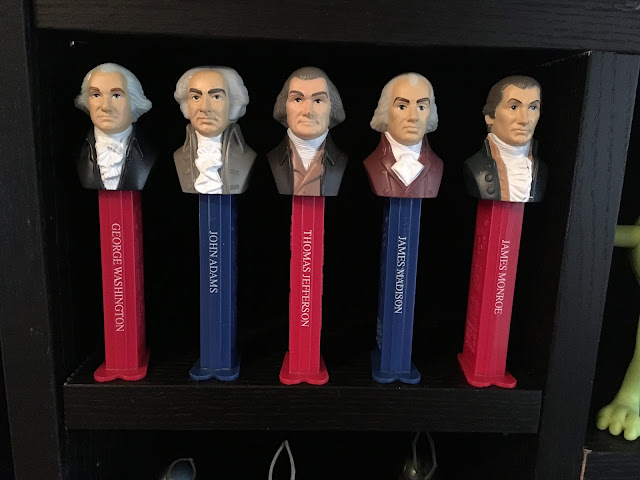 Also, as soon as the Christmas stuff was clearanced out, they immediately put up Valentine's Day stuff at the store. It's usually not a big holiday for decorations though. I'm not a Valentine's hater like Rish Outfield, but I'm also not going to deck my study out in hearts and crap. I do have two Pez dispensers that are Valentine's themed though--a little monkey and a little bear, each holding hearts. I needed more, though. There was room on the shelf for four of them. What to do? maybe I could put up a couple that's known for having a loving relationship or a great love story? I have Cinderella and Snow White and Sleeping Beauty and so on...but who am I kidding. They are never in a million years going to make a Pez dispenser of any of those girls' princes. Those guys are just arm candy, good for showing off at the ball, but barely even in the movies that their future brides headline.

Then I had it! Behold, the most loving couple that I have...flanked by their cute Valentine monkey and teddy bear: 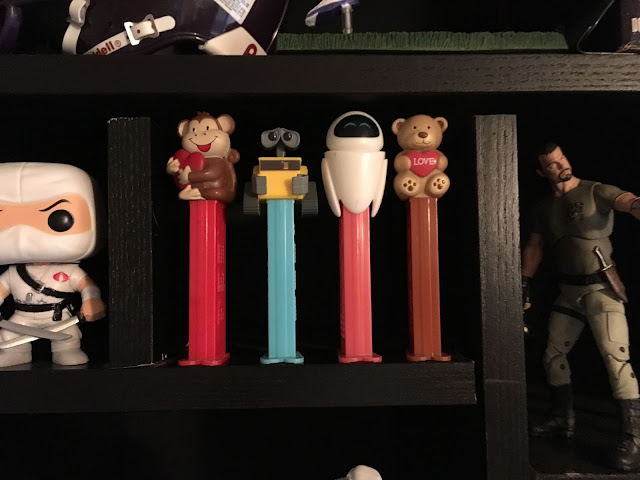 Posted by Big Anklevich at 1:01 PM No comments:

Hey, just published my most recent toy video on YouTube. It's about these two Marvel's Inhumans action figures that I bought recently. Check it out.

Posted by Big Anklevich at 9:24 AM No comments:

I was at the zoo this weekend for my son's birthday, and while I was there, I got a text from Rish Outfield. He was at the thrift store, and found this bottle cap collection. 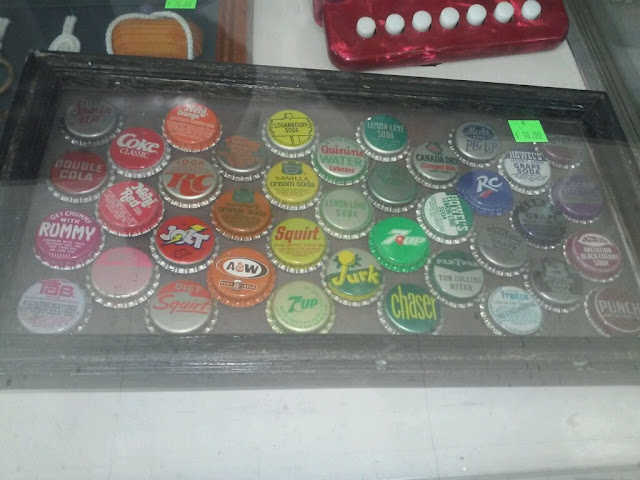 He texted the picture to me, asking if I thought it was cool. I did, and weirdly, a few minutes later in the zoo gift shop, I found this: 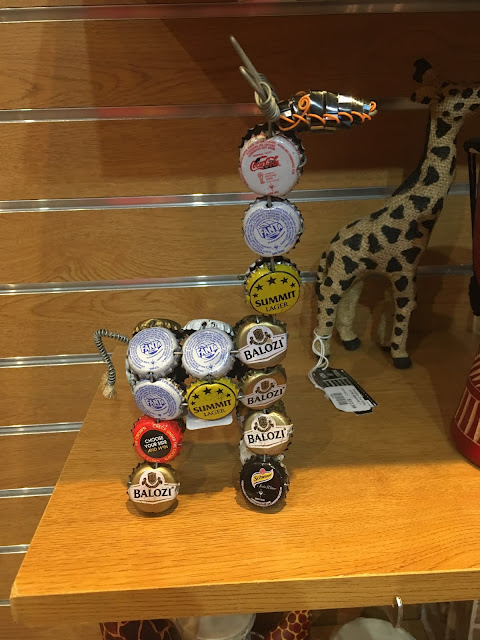 It must have been bottle cap day. I took a picture and sent it over to Rish so that he could share in the weird coincidence with me.
Posted by Big Anklevich at 6:00 PM No comments:

It was my six-year-old's birthday this weekend. Now, he's my seven-year-old. For his birthday present, we got him a set of roller blades. They came with a plastic strap attaching the two skates together that I had to cut off to make the roller blades operable. I thought it was pretty funny when I saw this tag attached to the strap: 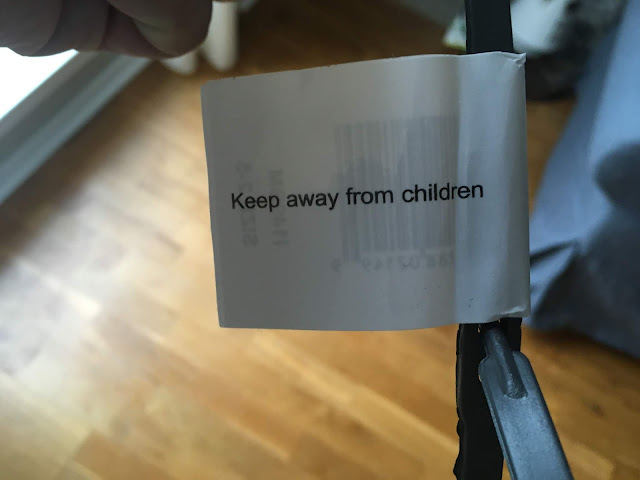 These are kids roller blades. How and why are we supposed to keep them away from children? I know, I know, they're not talking about the roller blades. They're talking about the strap. I suppose they are trying to prevent someone from strangling themselves with this cord. I think they mean keep the roller blades away from the children until the cord has been removed and discarded. Seems to me that if they had a cord that they want to stay away from children, then they should have not included it on a set of roller blades that are for children. Just put them in the same box, and that ought to be enough.
Posted by Big Anklevich at 12:00 PM No comments: