Back in February of last year, I challenged myself to write 500 words a day for the whole month. I was successful at it, so I expanded the challenge to 1,000 words a day in March. I once again managed to kick some ass. April I continued doing the same thing, and on into May. By the time May came around, I was 95,000 words into a novel called Sunny & Gray, and I was feeling more like a writer than I ever had before.

But then I had to move to Houston. This was quite an involved process, and it kept me very busy for weeks on end. I've heard bullshit about how you only have to do something for 30 days in a row to develop it into a habit, and all I can gather from that statement is that if you want to make a bad habit, do it for 30 days. Good habits take much longer to develop, because all it took was one missed day, and my writing habit was dead.

After moving to Houston was finished, I never got back to writing, despite having absolutely no good reason not too. Hell, for the first thirty days or so that I lived there, I didn't even have a job to occupy my time, and I still never wrote a single word.

Being a writer has been a lifelong goal of mine, however, so something has to be done about it. The pressure in my head has been building. It's also gathered from outside as well. My nephew, who has listened to the show for years, was asking me about why I don't write. We texted back and forth, one thing led to another...not like that...and now he's texting me every morning telling me to write.

I talked to Rish the other day, and he was lamenting his inability to find motivation for writing as well. One thing led to another...again, not like that...and now I'm here to announce to you that Rish and I are challenging each other to write. It's going to be a sort of Broken Mirror challenge in which the two of us write stories based on a similar thing. This time around, it's Metallica song titles. Rish has always had a weird fascination with Metallica song titles, and has long had a desire to do a Broken Mirror event between the two of us in which we base our stories around a Metallica song title. So, we're going to do it.

We've given ourselves a deadline of March 9th to finish the story and deliver it to the other person to be read and edited by them. I'm going to be calling my story "Frayed Ends of Sanity" and Rish said that he might be calling his story "My Friend of Misery". When we're done, we'll produce both of our stories for the Dunesteef podcast, so you will get the opportunity to hear just how we did.

While this isn't an official contest for the Dunesteef like previous Broken Mirror events have been, you are certainly encouraged to also write. Write a story based on a Metallica song title and have it done by March 9th as well. Good on you if you do. The more people fulfilling their dreams of being writers, the better. That's what I say.

I just thought we needed to put this out there so that everyone knew, and could hold our lazy asses accountable.

Posted by Big Anklevich at 10:42 AM No comments:

Spring comes a little earlier in Houston than in most of the USA. I think it might already be here.

Becuase it's been warm for a few days in a row, my wife decided she needed some free labor to achieve her backyard vision. So, this past weekend, I was out pulling weeds, trimming and even cutting down trees for several hours.

Our backyard was pretty damn overgrown when we first moved in. So much so that everybody in my family never even saw this before we moved in: 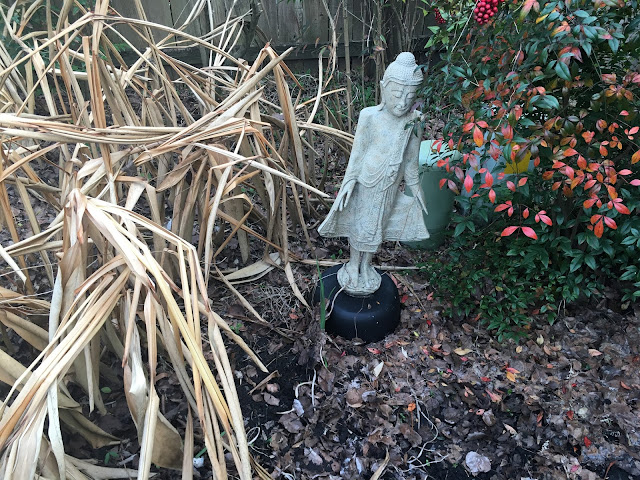 It had been hiding back there, and despite the many hours we'd spent in the pool all summer long trying to be able to handle the sweltering heat, nobody noticed it. Just crazy. I don't know why, but I thought it was pretty funny.

Do We Really Need This?

I know that the modern day society is addicted to likes and shares, but is this something we really need? 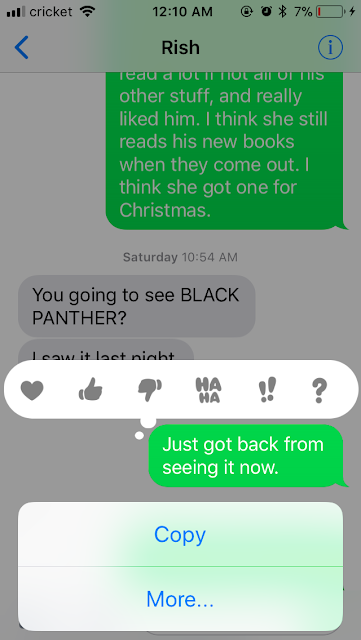 Yes, I can now like, love, laugh at, and so on my own texts! Why is that necessary? Are we that emotionally needy that we need reactions to every damned thing we ever say? Can't we just let people's response to our texts be their response to our texts? I don't know, but I find this so sad. Now everyone can tell me why I'm wrong. Go.

I know I'm a stodgy old curmudgeon traditionalist, but you'll never convince me that there's any merit to a pizza that looks like this: 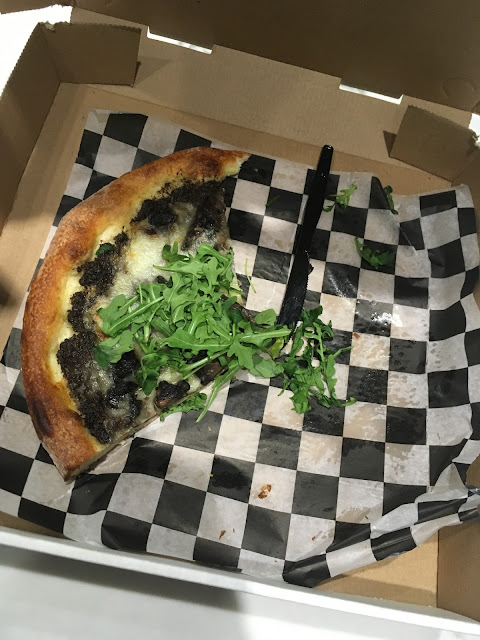 What is that, dandelions on there? The worst part is that it's almost gone. PEOPLE HAVE EATEN THIS THING? I think the CDC needs to be notified right away.

The Man Just Isn't What He Used To Be

I was out with my kid at Hermann Park, and came across this sign: 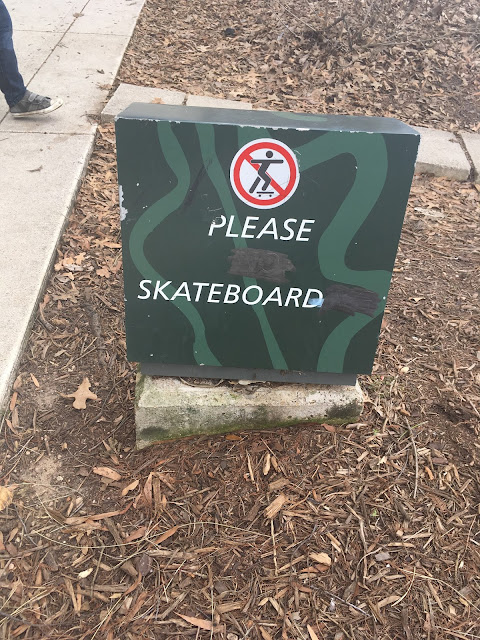 It's nice of the man to be so encouraging these days.

I don't know why, but things like this always make me chuckle. I suppose it's because I'm still really immature or something.

Posted by Big Anklevich at 10:32 AM No comments:

They launched the Falcon Heavy rocket today. It was pretty cool to see, especially because of the way the booster rockets returned back to their platforms and sat back down after doing their job. That's just rad.

This mission is just a test mission to see if they could everything to work properly, and it looks like they still have some work to do, because the third booster didn't make it back quite like it should have. As a sci-fi nerd, I'm always excited about the possibility of space travel, so I can't wait to see just what all will come of this.

And now that space has been opened up to private companies, it's interesting to see some of the things they've come up with, like Starman:

Is there anything out there that could make a nerd like me smile more? It's just so very cool.

Maybe I'm wrong, but this seems like one of those moments that will be forever crystalized into this unforgettable image. In the future, the picture of Starman cruising the heavens in his Tesla roadster will probably sit side by side with the pictures of Neil Armstrong taking his first step on the moon, the photo of his footprint, and the photo of the American flag planted in the lunar dust. 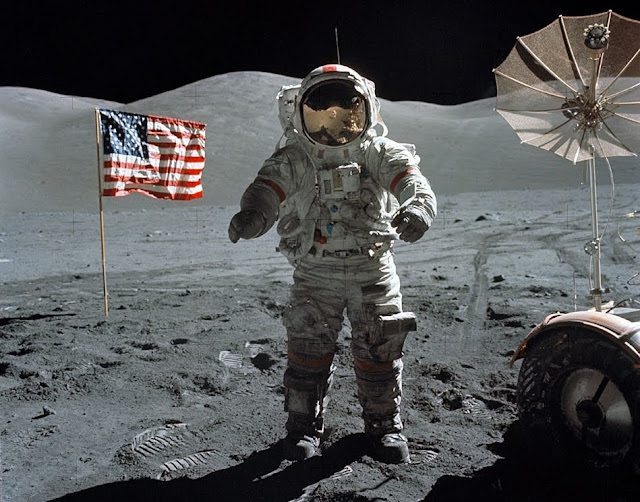 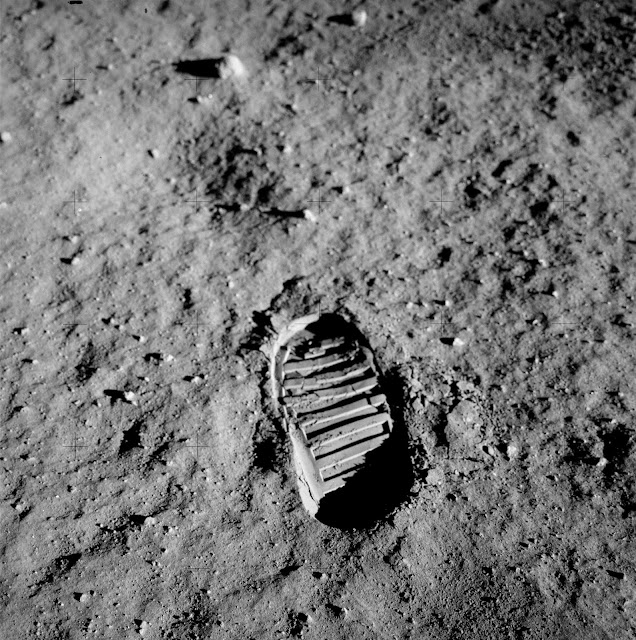 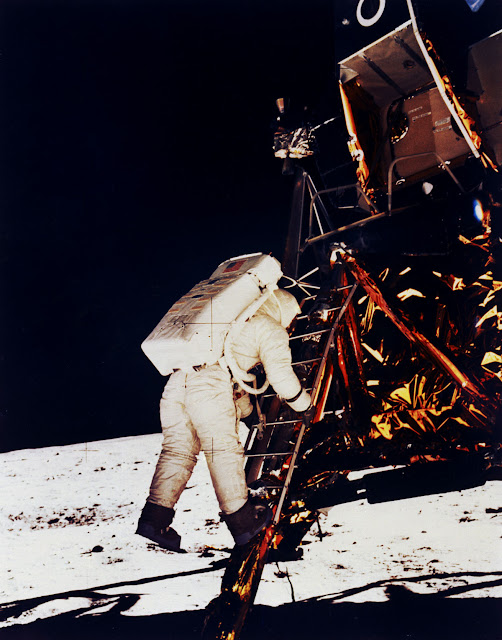 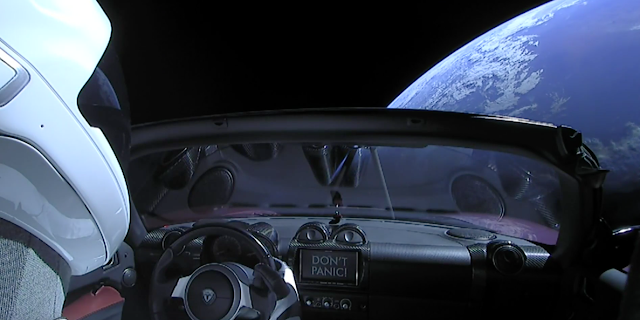 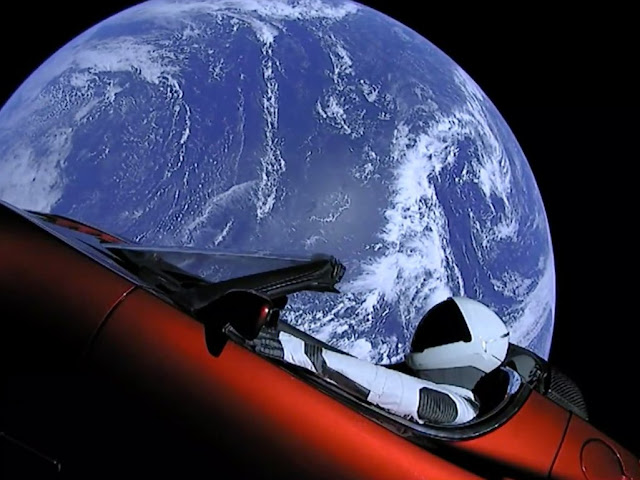 Can't you just see some future version of whatever will pass for mass media doing a flashing promo with Starman's likeness in just the same way that MTV did with the astronauts?

I couldn't help but throw together my own quickie video with what we'd rolled off of the Starman feed.

And then, of course, there's the fact that they called him Starman. If you know me much, then you know that I appreciate David Bowie who I got to know well because of writing a story ostensibly about him. It's called ChloeyYou can read the story here, or listen to the Dunesteef episode that featured it here.

Check out the animation of the mission, set to the tune of Bowie's "Life On Mars?"

I wonder what those future Martians a thousand years from now will think when they go and visit the site of Starman and his Tesla roadster the way we visit the pyramids or the colisseum in Rome. Will Bowie will live on echoing through their minds? Will there even be humans in existance by that time? I just love to think about it. I love it when something like this comes along and fills me with wonder.

I've been really getting into funk music recently, both the original stuff from the sixties and seventies and the newer revival stuff. So, I really enjoy Mark Ronson's "Uptown Funk" with Bruno Mars in it, as well as "Feel Right" with Mystikal in it.

I find it funny though that I can't bring myself to get the explicit version of the song. I know it probably makes me super white or something, but I just don't like songs that are an endless stream of profanity. Here's the original, explicit version:

I feel like a complete hypocrite, but I got the clean version of the song. I'm the same guy that rails against anybody who wants to take a filmmakers original concept of a film and cut it down to make sure it doesn't offend somebody's sensibilities, and here I am doing the same with a song. I hate those people like VidAngel, and have complained about their affront against art for years, and then I get the clean version of "Feel Right".

Is it different with music? They made the clean version for squares like me to buy, right? So, it's not the same as some third party eviscerating the things that their sensibilities say shouldn't be allowed, is it? I'm curious, because I honestly don't know.

Posted by Big Anklevich at 11:21 AM No comments: