It's been a pretty long time that I've been saying that I want to be a writer. For a long time, I've also quoted Stephen King as having said, "A writer is someone who writes every day," although more than likely I've actually been paraphrasing Stephen King. I don't even remember where that came from anymore, though my guess is his book, On Writing.

Over the years, I've made a few pushes toward becoming a writer. When I turned forty, five years ago, I made a goal to do the required stuff to become a full-time writer by age 45. I did a whole bunch of Anklecasts that talked about my progress...until they just petered out...along with any progress I'd made.

There were a few times where I made some real gains though. Like in 2017, when both Rish and I started writing every day together. I wrote my first novel during that. The first novel in a trilogy that I need to finish. And just this year, Rish convinced me to write every day in April which carried through, with less enthusiasm, in May, then petered out in June.

A week or so ago, I turned 45. That was when my goal was supposed to have come to fruition. Five years ago, I made the goal to be a full-time writer by now, but then gave up on the goal halfway through. Funny thing is, back when I made that goal it was because I had been telling Rish about how I'd originally made a goal to be a full-time writer by age 35. He said, "Just change it to when you're 45, and start working toward that." So, I did...for a little while anyway.

But now, here we are, and I'm 45, and I feel like quite the loser for having given up, gotten sidetracked, gotten distracted, gotten depressed, and so on. But, like Rish encouraged last time, I can just change the goal, and work toward it with renewed effort.

If I want to be a writer, I need to write every day. I've done it on occasions, but not managed to keep it up. I'm going to change that this year. I'm going to turn myself into a person who has a habit of writing every day.

How? Well, my goal this year is going to be two pronged. First of all, I will write every day...or as close to that as I can possibly manage. Second, though, will be a word count goal for the year. That way, I will need to keep going even if I fall on my face. And the goal is for the whole year, not just a month or anything less impressive, but a year. That is just year one, but I'm going to worry about year two later.

So, that's my goal for the year. Write every day, and write 300,000 words on the year. I've already started writing...I haven't been perfect, missed a couple of days, but I'm getting there. Getting used to it. As of today, I've written 5,764 words. 2,764 of that was a complete flash fiction story. I think I'll share that with you in my next post. You can read it if you like, though I'll get it on the Dunesteef or the Anklecast eventually too. 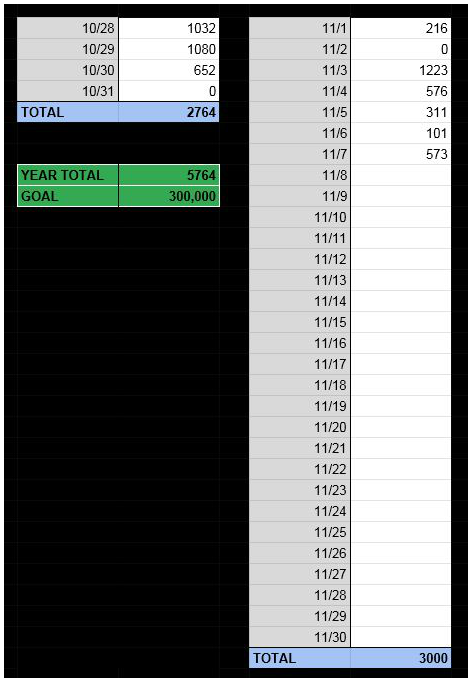 So, I'll keep giving you updates as the year goes along. Keep checking back to find out, and if you send encouragement my way, I certainly won't complain.
Posted by Big Anklevich at 11:44 PM