What Happened To Murphy?

I figured I'm morally obligated to post this one, owing to my other post about how nothing ever goes right for me.

The other day at work, somebody asked me if I wanted some french fries, he'd apparently gotten an enormous order and wasn't able to finish it himself. This is already unusual--free food, woohoo!

So he gives me this huge bag full of fries and one of those little cups full of ketchup, and I start making my way through them.

When I get to the last couple of fries, I dip them into the ketchup cup, and hoist them towards my mouth. I notice that a huge glop of ketchup is slipping off the fries, and before I can make any evasive actions, down the glop plunges.

Here's where everything goes alternate dimension on me. Rather than falling onto my shirt and dribbling down to my waist leaving an impressively large and unsightly stain, the glop of ketchup actually falls right back into the ketchup cup!

It was so different from the way things normally go for me that I was moved to blog about it.

I feel invincible right now. Today, a glop of ketchup, tomorrow the world. Nothing can stop me now.
Posted by Big Anklevich at 6:40 PM No comments:

Just uploaded the newest show, "Time In A Rice Bowl," by Rick Kennett. A sequel...or at least in the same series as his previous story on our show, "The Seas Of Castle Hill Road." Great reading by Cameron Horsburgh and some new actresses helped us out, Ildiko Susany, Deb Sampson, and Belinda Raisin. Check it out, it's awesome.
Posted by Big Anklevich at 1:00 AM No comments:

The other day, I was putting together our most recent episode for the podcast, and I needed some Heavy Metal music to use in the background of a scene. I went over to Jamendo.com, my favorite site for CC licensed music, and checked out what they had. I found some good music for the show, downloaded it, and was about to leave, when something caught my eye.

At the bottom of the page, there was an album that listed itself in the categories of metal and jazz. Metal and jazz, I thought, that's a combination I don't think I've ever heard before. I like metal and I like jazz, I bet this could be something good.

So I clicked on it, and I wasn't disappointed. This stuff was great! On top of the metal and jazz (the jazz really only shows up in the first track), they have a huge classical music influence as well, with a cellist in the band and a, get this, opera singer as their lead singer! It's like Charlotte Church joined the boys from Metallica for a jam session.

I remember when Metallica did their S&M concert back in the nineties with the San Francisco Symphony. I had high hopes for that, but it turned out to suck. It sounded more like an orchestra and a metal band happened to be playing in the same room, but they'd made no attempt to play together. This band, Diablo Swing Orchestra, is what I hoped Metallica's S&M might have been.

I'm sure most other people are put off right away by the idea of listening to an opera singer, but I'm not the timid type that only listens to Miley Cyrus pop songs. I like me some experimental stuff.

Anyway, I know this band isn't for everyone, but I think they are absolutely fantastic. You can download their album for free from Jamendo.com, so there's nothing to lose in checking them out. You can preview their songs with the widget just below here. Hopefully I manage to score them at least one new fan...come on John Smith, don't be afraid.


Posted by Big Anklevich at 8:19 PM No comments:

All Alone In The Moonlight

Without episode art, I had to change up my profile pic. Here's what I went with:

Posted by Big Anklevich at 4:30 PM No comments:

Musings From A Mall

So, on my vacation to the great white north, I spent a few hours in what once was the world's largest shopping mall. According to Wikipedia (which never has incorrect information, so I trust it implicitly), the West Edmonton Mall was the world's largest mall from 1981 to 2004 (although different articles say 1986-2004, see Wikipedia is never wrong...er...I mean). So what happened in 2004? Well the Chinese built a bigger mall. Then, someone built a bigger mall in the Philippines, and a bigger mall in Kuala Lumpur, Malaysia as well. The West Edmonton Mall is now the fifth largest in the world. The West Ed previously had always been in competition with the Mall of America in Minneapolis, Minnesota for the title of world's biggest, but the good folks in Asia have made that competition moot.

Kuala Lumpur having a huge mall seems particularly relevant, because that's the same town where they built the Petronas Towers; the twin set of buildings that you might remember seeing in *Entrapment* (that Sean Connery movie with Catherine Zeta Jones in the skin-tight black outfit sliding her butt under security laser beams in close-up). Those buildings displaced the Sears Tower as the world's tallest building. Then came Taipei 101, an even taller building, displacing that.

There are a few other buildings under construction now that will displace those, but this whole thing got me thinking. Until recently, America (and Canada) had the big buildings. Now, Asia lays claim to all of those titles. Why is it that Americans didn't find it necessary to try to top the Sears Tower with another even taller building? Have we perhaps matured as a society and no longer find it necessary?

See, it seems to me that that kind of thing eventually happens. Once, a hundred or more years ago, the tallest structure was in Europe, the Eiffel Tower. But Europe was already getting old by then. Their ambition was waning. Then came several world wars, destroying once and for all any glamour in the ideas of empires, conquest, and competition for world supremacy.

However, a hundred or so years ago, a once provincial nation on a different continent was just beginning to see these kinds of ideas as viable. So they set out to prove themselves as worthy. They built tall buildings like the Empire State Building and the Sears Tower. And they started taking their influence overseas. Eventually, the United States of America became *the* world power, as the British Empire used to be. But the British grew out of the need to assert dominion. Now, after a hundred years, it seems like the U.S. might be growing out of that need too.

Instead of building ever taller buildings, we just build them to be as big as they need to be. If you've ever seen the movie *Towering Inferno*, then you know that a tall building can be a real problem when disaster strikes. Why build a building that tall? Not really necessary. It's only important as a status symbol really, and does America need status symbols any longer? Not really, we've got all the status we need.

Once, the Arab world was the height of civilization. Then one day, they woke up and found that Europe had left them behind. Then America strode ahead of Europe. I know this is a big stretch to make based on a visit to a mall that's no longer as grand as it once was, but I think these signs point to the fact that, in the near future, Asia will be the home of the world superpowers that make the agenda for the rest of the planet. They are the ones who have the ambition these days. Hopefully they will be wiser than we have been.
Posted by Big Anklevich at 9:24 PM No comments:

Here's me at the Alberta Provincial Legislature Building in Edmonton. That place was so fun. 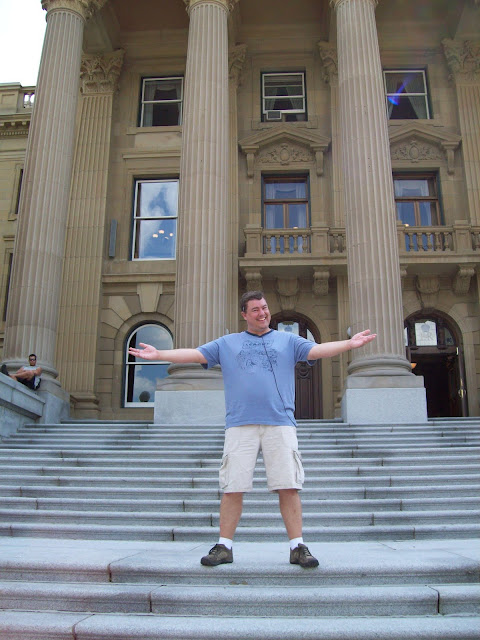 Here's me at the West Edmonton Mall. Once this was the biggest mall in the world, as with everything else, the Chinese have built something bigger and better, but this mall is still waaaay bigger than any mall ever should be. It's a little creepy inside there. 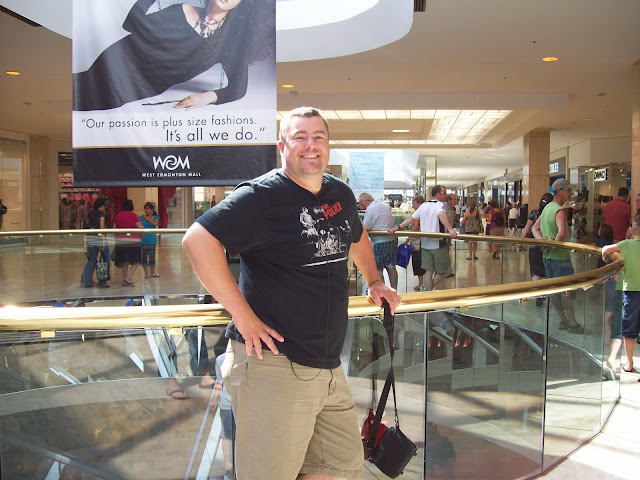 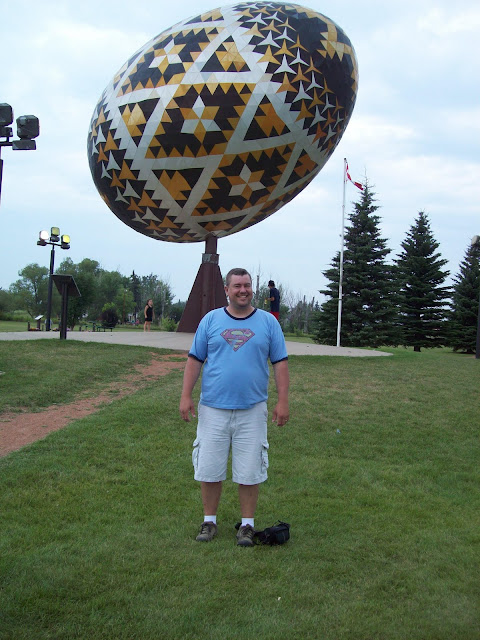 Man, don't I know how to have a good time on vacation?
Posted by Big Anklevich at 9:18 PM No comments:

So, I spent a little time out of sight. Out of touch you could say. But now I'm back.

That's right, I just spent a little over a week in rural Alberta, Canada. It's pretty country, but it's definitely not what I'm used to. I'm not a big city boy--I grew up in a suburb of Sacramento, not the mean streets of New York or Chicago--but spending my vacation in a town with a population of less than 500 was a different kind of experience for me. I didn't realize how much of an internet addict I've become until I went to a place where they think this is what people mean when they say online. 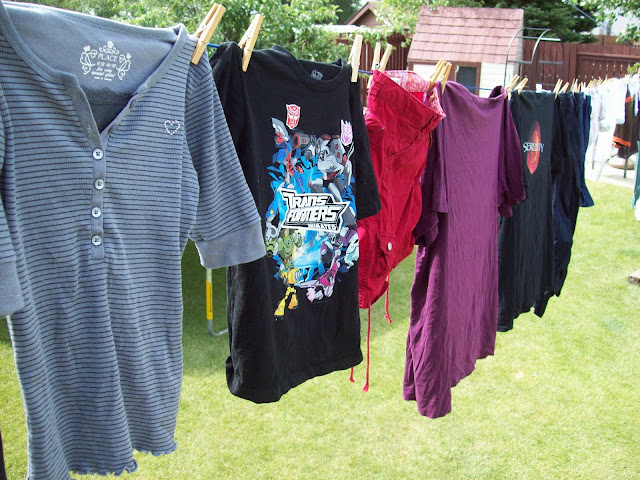 I've mostly managed to avoid this vacation over the years of marriage, sending my wife and kids out and staying home by myself, or meeting the in-laws halfway in Montana at their cabin. This time, though, my wife insisted. Her parents will be moving away from the house she grew up in, and she wanted to see it one last time. Her mom was ready to unload anything and everything she'd been saving for her kids over the years. Our van came back loaded down so heavy that we were lucky not to be scraping on the axles.

I did get a whole lot of time to do nothing though. Strange how a vacation that isn't jampacked with activities seems to last longer than it really does. I'm more used to a vacation that is over before it even feels like it's begun. So, with all the time I had, I read a shload of submissions to the Dunesteef. Then, with still a week to go on vacation, I put pen to paper--for the first time since the Broken Mirror Story Event, and for only the second time this year--and I wrote a story. And I wasn't kidding when I said pen to paper. I don't have a laptop, so I had to write the story the old fashioned way. It is 26 pages of handwritten fun. I was so proud of myself for finishing that I took a picture of it (after all digital pictures are free). 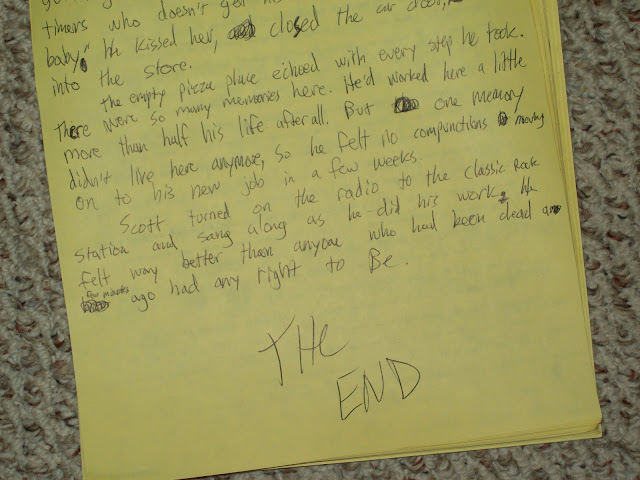 Then, because I had more time, I wrote a second story. This one is much shorter, just a little flash piece. I think it's only 350 words, but the idea couldn't be stretched further...or at least I don't think it has that much potential, maybe a competent writer could make a novel out of it, but that's not me, now is it. 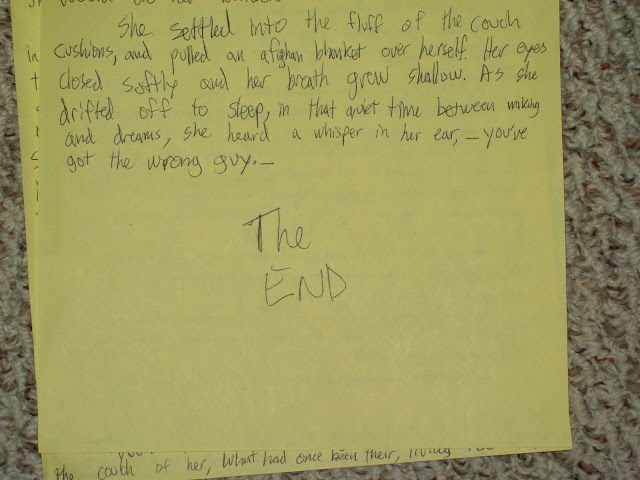 So now I'm back, and after writing as much as I did, I'm excited to do some more. My job and family, so far, have reminded me why I never managed to write before though. I'll have to see what I can do.
Posted by Big Anklevich at 8:02 PM No comments:

Just published the newest episode. It's another story from Abigail Hilton called "Miranda and the Butterfly." It's beautiful stuff. Hope you enjoy it.
Posted by Big Anklevich at 2:00 AM No comments: