Someone at the half marathon that I ran last weekend had a sign with some very important advice for runners. 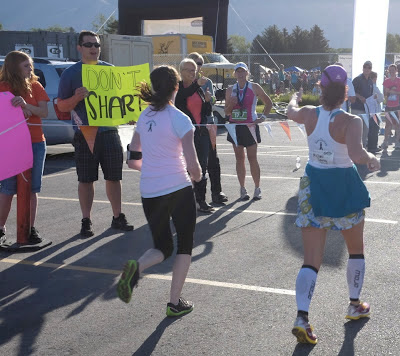 Words to live by.

Running The Half Marathon

I'm going to make this short and sweet. I published an Anklecast yesterday that can give you the full story if you want to hear more.

Saturday, I ran my first half marathon. It started in the mountains, and came down the hill into the valley. 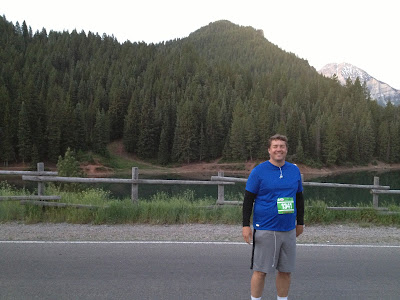 The scenery was really nice for the majority of the run, and the downhill grade probably helped me to get a much better time than I would have if I had to run the whole thing on flat land. It wasn't a great time anyway, but I did manage to get in just over 2:36. 2:36:09.2 to be exact. I came in 1,671st place overall, and I was the 624th man to cross the finish line. I think the genders probably weren't very well balanced among the participants. 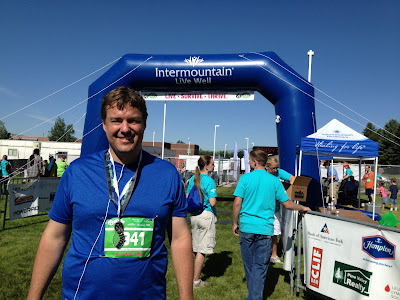 My wife and kids came out to cheer me on, and they made signs that said things like, "13 miles, that's really far, come on Dad, you're a star!" And they were right. It was really far, but I made it the whole way without ever walking. And that is what really matters, at least to me.

Sadly, a half marathon is only half way to my goal. Up until Saturday, I hadn't felt like things had been too hard. But upon finishing that race, I felt like I should be finished. I'm really going to have to step it up to make it to 26 miles. I've been slacking a fair amount recently. I'll have to quit with that. Slackers don't make it to the end of a marathon.

I won't give up though. The race on Saturday was to benefit cancer patients, to help them pay for their treatment if they couldn't afford it. Part of the things that they did was put inspirational phrases along the route for the runners to read. A lot of them were cancer related. Things like, "I'm running for her," "The day I found out I had cancer, I decided that I was a cancer survivor," or "This mile is for Mom." But some of them were simply encouragement for runners. Several of the phrases resonated with me, and one of them particularly so.

My brother-in-law who has been training with me and ran the race on Saturday with me as well, keeps saying that I need to do something less than a marathon. He says he worries that I'll get injured, because I'm starting from scratch and going to the top of the mountain so quickly. He thinks I should take years to get to the point I want to go to. He says, "You can't win, Rocky!"

The phrase I remember best from along the race course was this: "I run because I can, I can because I want to, I want to because you said I can't."

I won't quit. I will keep running until I cross that damned 26.2 mile finish line. Maybe I will get injured, and it might sideline me for a spell, but it won't matter, because I won't give up. As Rocky always showed us at the end of each sequel, he could win. He did win. 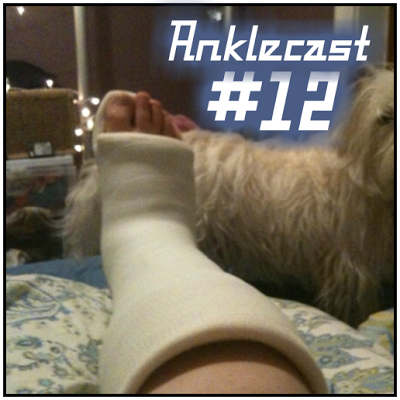 Big ran his half marathon race over the weekend. He gives a full account, as well as a quick summary of the other arduous event in his life, his recent move.

And, no that's not his cast. The race didn't go that poorly. Right click HERE to download the episode, select Save Link As, and save the file to your hard drive.

Posted by Big Anklevich at 12:51 PM No comments:

Random Guy Is Back!

I don't know if you love him like I do, or if you missed him in his absence like I did, but apparently, YouTube user ItsJustSomeRandomGuy is back and making his videos about the upcoming summer movie season.

He started long ago making parodies of the Mac vs. PC commercials that you might remember.

Here's his brand new Iron Man vs. Superman video. It's good stuff. He never fails to make me chuckle.

It's part two of my ongoing series of running videos! I'm sure you already saw my first video in which I took a shot of myself for each day that I ran. Then I compiled those into a video that counted up to the 100 mile mark. If you didn't, well here's a link to my post about that video.

You see, I made a goal to run at least 500 miles in 2013. It's going well, and I'm halfway there. I think I may well even manage to exceed my goal before the year comes to an end.

I'm pretty excited about it all. I've made 250 miles, and I run my first ever half-marathon this weekend. Things are going well. Now I just need to get my diet under control, so I can lose some weight, and make life a little easier on my legs that have to carry me all those miles.

This coming Saturday I'll be doing a marathon in a sort of half-assed way. I think I'll just quit at 13.1 miles instead. No, I'm just kidding. That's as far as I'm allowed to go for this race. It's the first step or maybe the halfway point in my training to run a marathon this September. 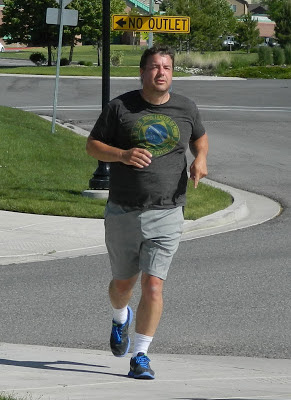 I'm pretty excited about it. It should be relatively easy. I've already run 13 miles before. It was our long run on a Saturday a few weeks back. So, I know I can do it.

I'm a wee bit afraid too, though. This week, I went out running, and the muscles in my calves and shins started freaking out less than two miles in. It hurt bad enough that I had to stop and walk a bunch of times. It felt as though the muscle down the front of my calf was somehow the only muscle I was using while running. As if I was doing some sort of isolation exercise or something.

It did it again this morning, but I pushed through it, and it pretty much went away. So, maybe I'll be fine after all. Just what I need though. A problem the very week of the race.

Anyway, I'll get on her and let you know how it went sometime next week. Maybe, although I doubt it, I'll even find time to write something up the day of the race. We'll see.