I didn't believe, and now I see the error of my ways. I scoffed and poo-pooed when the prophets on the TV news warned me of Snowmageddon. But this morning I came out to my car and found that the end of the world had occurred during my sleep, and now my car was buried in a foot of snow.

I guess, because I was a wicked unbeliever, I wasn't included in the rapture that took up the faithful before Snowmageddon hit.

The worst part about the snow, is that heading north to work...wait, slogging north to work is probably more appropriate...I came over the hill, and was greeted by sunshine and clear roads. Nobody up here got any snow at all. Just a slight skiff is all. It seems to always be that way too. Every time there's a big storm, they get nothing. So when I show up 15 minutes late for work complaining of snowy roads, they assume I'm just a bad liar.

They're unbelievers too. They assume the prophets on the TV news weren't inspired. That's probably why they're still here, not risen in the rapture that saved the others.

Still, I think I need to move elsewhere, because this is ridiculous.
Posted by Big Anklevich at 1:12 PM 2 comments:

It wasn't too long ago that I mentioned an experience with someone flashing their lights at me to warn me of an upcoming cop doing a speeding sting. At the time, I wasn't sure why the person was flashing their high beams at me, but I had an inkling of an idea, and I slowed enough to avoid a ticket.

Today, I was going to work down this new road that just opened up by my house, when I saw a car coming towards me flashing their high beams over and over. This time I knew just what to do. I was only going about five over the speed limit, but, just to be safe, I slowed a bit more. And what do you know? Around the bend, two cop cars were laying in wait. One stood on the sidewalk with his radar gun in hand, taking readings of all the cars that passed.

Again, thanks to the kindness of a stranger, I was able to avoid a ticket. I can't wait to get a chance to pay it forward, and, unless the cops change their ways, it probably won't be long. They are endlessly laying in wait for speeders on this new road.
Posted by Big Anklevich at 4:29 PM No comments:

My wife and I watched the film Whip It the other night together. Whip It, if you've never seen it, is a movie that features roller derby; a sport that was popular in the seventies, then fell out of favor, but has recently experienced a surge in its popularity. We enjoyed the movie, so when I saw free tickets to a roller derby event sitting on the counter at work, I snatched them. Watching the Midnight Terror versus the Devil Dollz seemed like it might make a fun night out. 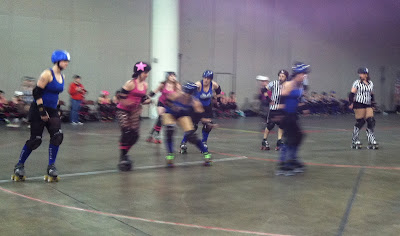 While it was fun seeing these women skate around in circles trying to knock each other's wheels off, watching roller derby to me is like watching a rugby or cricket match. It's just incomprehensible. They handed out a rule sheet with the program, which helped a little, but seeing it happen left me with a lot of questions that the rule sheet didn't really address.

Despite the difficulty of learning the new sport, we still had a great time. Roller derby does its best to make it interesting in lots of ways too, from the goofy fishnet stockings and short shorts that the players wear to the crazy nicknames that they use like "Skull Candi," "Skatey Gaga," and "Black & Deckher." It was an interesting crowd at the event, so there was a lot to look at, and we even rode the elevator down to the parking garage with the father of one of the players, which, of course, isn't really saying that much since they're all local women. It's like saying we got the autograph of the kid who scored the winning goal at the local rec league game. But still, I thought it was cool.
Posted by Big Anklevich at 8:05 PM No comments:

The other day, this girl that just started working in my office said to me, "Has anyone ever told you that you look like Ricky Gervais?" 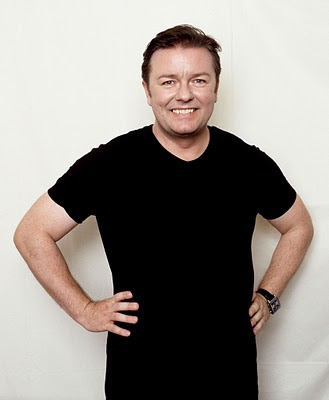 "No" I said. I admitted that I didn't really know what Ricky Gervais looked like. I knew that he'd just made a big splash by hosting the Golden Globes and saying all sorts of mean things about celebrities, but I didn't watch the Golden Globes.

So I went back to my computer and IMed Rish, telling him about it.

DUDE, RICKY GERVAIS IS HIDEOUSLY UGLY, he replied, IF SOMEONE HAD TOLD ME THAT I LOOKED LIKE RICKY GERVAIS, I'D BE REALLY OFFENDED.

I looked at some pictures of Ricky Gervais, and I can kind of see the resemblance. I'm fat, especially in my face, which makes me look like Mr. Gervais. I just got a haircut the other day too, and it is similar to the way Ricky wears his hair.

The worst part is that it wasn't always this way.

A GIRL ONCE TOLD ME THAT I LOOKED LIKE TOM CRUISE IN HIGH SCHOOL, I IMed to Rish. 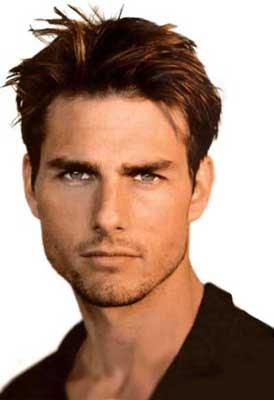 NOW THEY SAY YOU LOOK LIKE TOM CRUISE ON TROPIC THUNDER, IMed Rish back to me.

RIGHT, I replied. I don't generally use emoticons, but I could have probably found several that portrayed my thoughts right then. 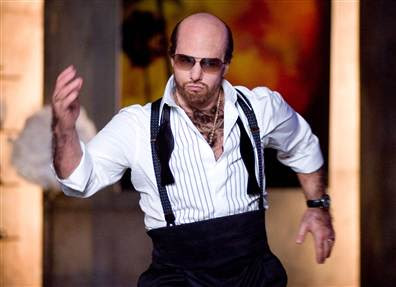 Haven't had much to say on here lately...well, let me rephrase that, I've had plenty to say, but haven't said much on here lately. I feel guilty when I spend time writing blogs instead of writing on the story that I should have finished weeks ago.

But here I am with something to say (cue cheering). A while ago, Bosley Gravel decided he was going to start doing audio versions of stories that he had published on his Cavalcade of Terror site. I finished up a reading of my own story that he had previously published on there called, "The Search For Freedom." If you'd like to hear my dulcet tones...er Kermit tones doing an audio version of a really short story I wrote a while back, then check out this link. It's shorter than a Thomas Newman song on a Pixar soundtrack, so if you hate it, you'll not even have wasted enough of your life to demand it back.
Posted by Big Anklevich at 11:20 AM 1 comment: