We had our Halloween party at my work today. I pretty much whimped out and wore this as my costume: 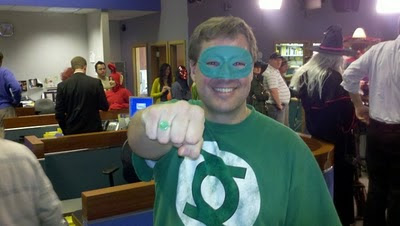 Yeah, it's just a mask and a plastic ring along with my Green Lantern shirt that I already owned. It's hard to wear a Halloween costume for a whole day at work though, y'know?

The main reason I made this post at all, however, is because I wanted to post this guy's costume: 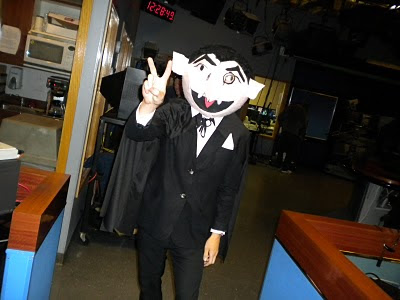 Pretty freakin' impressive, I thought. The guy made it himself with paper maché. I'm always so impressed by people who do things like that. Maybe some day I'll put that kind of effort into my own costume instead of just grabbing a T-shirt out of my closet and calling that a costume...but probably not.

Oh, I almost forgot this: 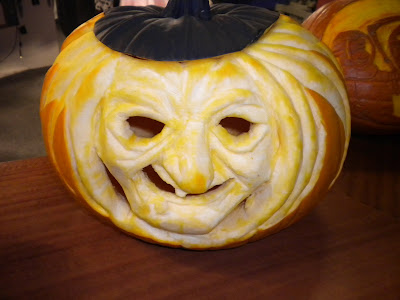 Yeah, that's a freaking pumpkin. Hard to believe, but I saw it with my own eyes. It's not molded clay, it's carved pumpkin.
Posted by Big Anklevich at 12:32 AM No comments:

In Honor Of That Auspicious Day

Posted by Big Anklevich at 12:36 PM No comments:

Is It Worth It?

Okay, enough of me whining. Instead a completely non-depressing post.

Rish asked me the other day about NaNoWriMo, the National Novel Writing Month event that happens each year in November. He asked me if I had to start in November and write a novel, what would I write. Since November is very close, I figured I would have to use a story idea that I had done significant planning on already. So I told him what story I would do, the one about the alien possession...hell, I mentioned it in this week's episode that just hit this afternoon.

So, then Rish went home, and I was left alone with my thoughts. My eyes are always bigger than my stomach, and soon I was wondering if NaNoWriMo was something that I could accomplish...or at least attempt to accomplish. After a little while, I had basically convinced myself that I should do it. Then a bunch of crap happened that sucked away all my free time for the next week, and now I'm wondering again if it is possible.

So, I pose these questions:

I'm old enough that now my birthday is no longer a happy occasion.

The closer it gets the more depressed I feel. Why do we all have to get old? Why couldn't it just be you and not me? That would be better, right? Right?
Posted by Big Anklevich at 4:13 PM 4 comments:

Today I finally sat down and took the time to write out my October Scary Story Event entry. It's short, just a flash story, and it's fairly crappy, but hey, I did it.

Just a quick follow-up to last week's stupid thing of the week. Remember it? It was when I forgot to look at my schedule and accidentally drove my 45-min commute to work only to realize that I wasn't supposed to be there for another three hours. Then I remained sort of stranded, because it was too much driving to go all the way back home, because I wouldn't be there long before I had to turn around and come all the back to work. So I wound up wasting time around town until my actual shift finally started. Remember that?

Yeah, I did that again today. Someday I'll learn, but apparently us folks on the dumber side of the street need repeated lessons before it takes.
Posted by Big Anklevich at 2:19 PM 2 comments:

So, after whining extensively the other day on here, I made that goal to write for a half hour each day. Small bites, and eventually you eat the whole elephant, right?

Just as an update to everyone who commented and offered advice, I did manage to write for a half hour today. 520 words worth.

I think I need to be careful with this story though, or it may end up like other ones that I jumped into without preparting enough for. So tomorrow, I will write on the character profiles, before going any further.

I'm going to try using Abbie's "Not allowed to..." method, forbidding myself from logging into my email, Facebook, AIM, Twitter, etc., until after I've written my half hour. We'll see how my resolve works on that.

Thanks to all for your comments.
Posted by Big Anklevich at 11:09 PM 3 comments:

Stupid Thing Of The Week

Last night, Rish and I got together to do our weekly podcasting marathon. We finished up at about 3am, and Rish headed home. This morning, I got up at 8am, and groggily made my way to work. When I walked in the door, one of my co-workers looked up, and did a double take.

"What are you doing here?" He asked, "I thought you weren't in this morning."

My stomach dropped. He was right, I was supposed to come into work not at my normal time of 10am, but for the evening shift starting at 1:30pm. With my commute being almost an hour each way, it didn't make sense for me to go all the way home, only to turn around and come all the way back an hour and a half later. I could have slept later (which I always desperately need on Tuesday mornings). On top of that, my wife, who also works full-time, had a day off today, so I could have spent the whole morning with her (and we get precious little time together as it is) if only I'd paid attention to my schedule.

So, I spent the morning wandering around stores, and trying to sleep in my car. I wasted my whole morning away at nothing of worth.

If I could only get my hands on that a-hole that changed my schedule around, I'd end him.

You've probably guessed it by now, but the guy who makes the schedules for me at work? Yeah, it's me.
Posted by Big Anklevich at 6:56 PM 1 comment:

I used to go to Dean Wesley Smith's blog site a lot. I really liked the advice and experience that he would pass down to us aspiring authors out there. I can't bring myself to go over there anymore. It just gets me down.

I hardly post on my own blog anymore. I feel guilty when I spend any time working on it.

I guess that's what life is all about, guilt and depression.

I have a family, and they demand a certain percent of my attention. They deserve even more of that attention. Someday, I'll be regretful for not giving them every moment they deserve, when they've grown and gone, and it's too late to give them what they deserve.

I have a job that demands a certain percent of my attention. It deserves less of my attention, but I've always been one of those people who gives their all for the job. I guess I don't belong to that entitlement generation.

I have this hobby that demands a certain percent of my attention. It's a little surprising how much work that podcast can be, even with all the help that people like Nicole and Bryan and all of our slush readers give us.

Then I have my dreams and ambitions. We have a listener who has been going back and listening to all our shows from the beginning, and Rish asked him to remind us of any ongoing gags that we use on the show. One of the things he mentioned is how we talk a lot on the show about stories that we will probably never write. Damn, that never stops weighing on my mind. Since I was a young man, I've wanted to be a writer. I've been pulled in one direction or another as I cruised through life, but the other things always faded away eventually. The writer inside me never goes away though.

My birthday is coming soon. Another year gone, and a whole lot more of nothing done to acheive my dreams. This year, I learned from Dean Wesley Smith the pathway that needs to be taken to become a writer. I'd been going along for years thinking that talent was what mattered, not hard work. He put me straight. What I need to do is write. Write, write, write. It's how one goes from being a mediocre writer to a good writer, and from good to great. Learning and practicing. When I learned that, I started immediately wishing that I'd heard it years ago. So many years wasted dreaming rather than practicing. Polishing my one story rather than practicing by writing another.

But it's been months since I learned what I need to do, and I still don't do it. I suppose I have many years to come that I will also waste dreaming rather than practicing. I just don't know where I can fit any of that stuff in. I already mentioned the time I have to spend on my job, my family, and my podcast hobby. I can barely find time for the podcast. And it's a never ending guilt circle. I feel guilty for ignoring my family to work on the show, so I try to work on it late at night when everyone has already gone to bed. When I start thinking about writing, I feel guilty that the podcast is being left unattended to. We'll never get a show a week like we say we want to.

Wow. Writing this crap has got me seriously depressed. Meanwhile, Rish is pinging me on the IM telling me about the skits he's writing for the show. Over the summer I came within a hair's breadth of quitting the podcast. Rish was with me on it for a while, but he got over it, and now, whenever I mention anything about it, I can see the hurt in his eyes. Quitting the podcast would be taken as a serious betrayal, I think. If I'd started it up by myself, and done it solo, I could've just dropped it whenever I wanted, like I did with my soccer podcast that I did three episodes of before deciding it was too much work for too little payoff. With Rish on board, however, it has to be a mutual decision, and I can tell that he doesn't agree with me.

Then there's all the listeners. We have a bunch of great listeners that would feel betrayed as well if I just decided to throw up my hands and say, "Eff you all, I quit." I don't know what to do. I'm sure if I quit the show, all that would happen is that I'd find some other way to occupy my time rather than writing. So I suppose there's no point in it at all.

I guess what I need to do is force myself to write a short amount each day, like a half hour. And then, when it gets to where I need more time, I can consider something more drastic. But before I throw away the one good creative thing I do, I better make sure I will actually replace it with writing if I did quit.

Half-hour a day. I could manage that, right? Don't answer that...I'm trying to not be depressed.
Posted by Big Anklevich at 1:20 PM 7 comments: