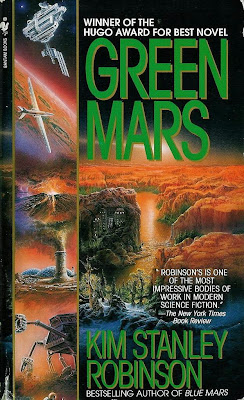 This book was more of the same, which is good, because I really enjoyed the first volume. It tells the story of the people who settled Mars, and their struggles to both terraform (or fight the terraforming of) their world, and to free themselves from the yoke of the earth-based companies that are calling the shots in their lives. The first book finished out with a revolution, but it was a failed revolution. The transnational companies that pull the strings on Mars put down the revolution, and killed many of the characters we'd been following through the course of the story.

This time around, the Martians change the way they go about things. The revolution is planned carefully, and not rushed into without forethought. And things go better in many ways.

The terraforming is also progressing at ever higher and higher levels. By the end of the book, Mars is definitely a green world (although the word green in this book has more meanings than just color. It also counts as a political philosophy, and I don't know if it's quite green in that sense of the word just yet). And, the next book is called Blue Mars, which they are well along the way to achieving as well. It's probably a rosy outlook on how easy it would be to terraform Mars, but it still fires my imagination. The idea of Mars as a smaller, redder version of Earth really excites me.

Now, I did say this book was more of the same, and I meant that. It is still as hard an SF book as I've probably ever read. Sax Russell becomes a major point of view character in this novel, and he is one of those scientist-type characters that should probably never be the point of view character in a novel. Pages upon pages in this book are devoted to his scientific musings, and laypeople like myself will just plain not understand much of what he has to say. Sax goes through a lot in the story, and changes significantly too. So, in the end, it was worth it, but be prepared for lots of in depth science talk in this book the same way as there was in book one.

Again, however, this book was enjoyable despite the incomprehensible science. The first book was very dark. Things went very poorly for people on Mars. I always thought the deal with trilogies was that the second book was supposed to be the darkest one, then the third book was where all the troubles were resolved on an up note. In this series, it's not that way. Book one is the failure where things look darkest. In book two, things look up in pretty much every way possible. And I can only assume that book three will deal with the aftereffects of all the changes book two brought us. I guess I'll see when I get to that one.

For now, however. I recommend this book the same as I did book one. In fact, I recommend it even more, owing to the more positive note it strikes. Of course it would be worthless to read without having read the first, darker book. So, you have to take the bad with the good. After all, you can't know that sweet tastes good without knowing that bitter tastes bad. At least that's what they say. Who says that? Well, those guys over there.

So, my next book...well, it should be the next chapter in the WWW trilogy from Robert J. Sawyer, but I'm just too into The Expanse right now, so I think I'm going to go ahead and read book three of that one, Abaddon's Gate. I'll get to the other one soon enough. It's not going anywhere. Don't judge me.

Posted by Big Anklevich at 8:35 AM No comments: 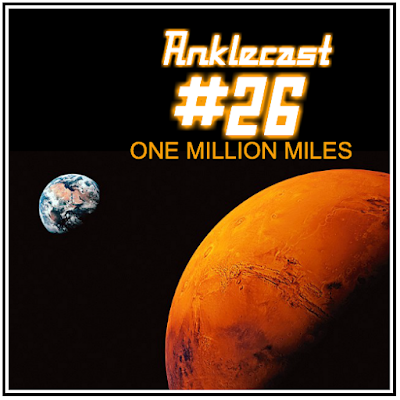 I shipped my pants pretty much the whole month of April through. I'm going to turn it around, however. It won't be my condition forever. Novel writing time is coming up, and my story is starting to burn away in my mind. I'm getting excited about it. But I've got to make some changes to make this novel thing succeed.

I talk a bit about that, and I have a special surprise. Normally I don't do stories on here, but I wanted to show that I can turn things around, so I did one this month. It's a little bit of flash fiction called "One Million Miles." If you like it, let me know, and I'll try to do one more often.

Oh, and something I've never had before but will in today's show is a listener question! A listener sent me an MP3 file of their question, and I answer it on the show. That'll be fun too. All around good times today. Hope you enjoy it.

Music for the story was "Despair and Triumph." And my regular music montage is "Crossing The Divide." Both are courtesy of Kevin MacLeod of Incompetech.com.