Sweeps is over, and I'm going to try to get back on the horse. I said at the start of November that I was going to try to write every day for a year, but circumstances overwhelmed me, and I only wrote twice in the entire month, if I remember right.

So, now that I have a moment to breath, I'm going to try it again. I think I need to adjust my goal a little, but I'll talk about that in a different post.

Today, I'm just here to report that I wrote 723 words on the background of a story (or more likely a series of stories) that Rish and I are going to collaborate on. It'll probably be a while before we get started on it in earnest. For now I'm writing the bible for the series.

I'm excited to get back to it though. I had a good time writing what I did. Yeehaw.
Posted by Big Anklevich at 11:17 PM No comments:

My daughter wanted to do the Turkey Trot this morning. It's a 3.7 mile fun run/walk. Any chance I get to get my kids out and active instead of planted in front of a TV or video game console, I take. So, at 7:30 AM this Thanksgiving, I was at the starting line to run a while and earn my annual pig out dinner.

We walked mostly. My daughter is not in shape for a long run like that, but I did get her to run a bit. Of course, we had it easy. We could have been one of these guys. 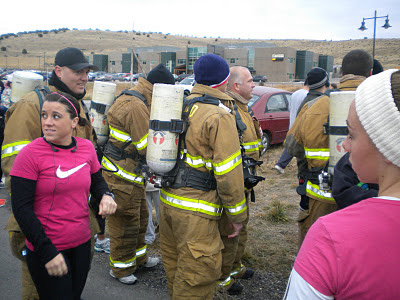 Yup, that's the local firefighters, all geared out to run for nearly four miles. I'd surely not like carrying one of those tanks on my back for a run like that. Firefighters are studs.
Posted by Big Anklevich at 2:02 PM 1 comment:

Another One For Ya 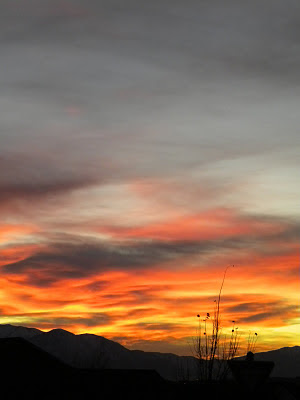 It was another beautiful dawn this morning on my way to workout, so I thought I'd snap a pic and post it here for those of you who are into those kinds of kinky things.
Posted by Big Anklevich at 10:07 AM No comments:

Not that this counts as writing, since my goal is to get much more than 100 characters written per day, but I wrote my first twabble for the Drabblecast. Who knows if Norm will use it or not. But in case he doesn't, I'll share it with y'all here.

Though he'd never been a particularly hairy man, now that the ice age had returned, he regretted the laser hair removal.

Strangely, it required no editing. I expected it to be way too long, but once I realized that spaces didn't count, I was golden. Without editing, it was exactly 100 characters.

It'll probably be my last twabble as well, but you never know what inspiration might strike and when.
Posted by Big Anklevich at 11:37 PM No comments:

There's a reason I don't do NaNoWriMo each year. Well, there's a few of them. One is because I'm the lamest piece of crap there is. But aside from that, November is not a good month for me. Work always ramps up big time in November each year, and, conversely, my free time goes away. This year is worse than most though, because one of my colleagues became a father the other day. He is taking time off to be with his new baby, and we are now short-staffed on top of having more to do than usual.

All of that makes me wonder why I chose November to be the start of my big "I'm going to write 500 words a day for the whole year" thing. I guess I had to start sometime, but it seems like shooting myself in the foot to pick one of the busiest months of the year as my start month. I should have given myself a chance to build up some steam and get some good habits before facing a challenge like this month.

I haven't done very well so far this month. I've written 2,500 words of the 5,500 that I should have written so far. I've got a lot to make up for. On the plus side, I finally put a "THE END" on the story that I spent half of September writing called, "Sepia Tone Prison." It's really long, a little north of 11,000, but it's done. By the way, the offer is open to anyone who would like to read it (and offer constructive criticism if you'd like, though that's not necessary). Just drop an email to editor at dunesteef dot com, and I'll send the story out to you. I was going to post it on the blog, but some people said that it would be a bad idea, making it unsalable later on. Of course, they haven't read the story, to know how unsalable it already is, but whatever...

So, I've got a lot of work to do to catch up. I think I have several double days to put in. Hopefully, I can start with those tomorrow.

Rish and I have been talking about collaborating on a space opera story about an independent space trader ship and its crew. We're still hashing out the details on how it will go, but we're both fairly excited about it. We want to make it a very rich universe, leaving room for many adventures and multiple stories. I suppose I can write a bunch of my words as the background and character bios for this tale. (Or maybe these tales!) Lots of world building to be done.

Then, I suppose I ought to get a story started that I could write on the days that it's Rish's turn to be writing on the space opera. I started a story earlier this year, that I think I might dive into again. It's a juvenile story (I think that's the category, right? The one that comes before YA) about a young man whose computer spontaneously develops artificial intelligence. I've started this story several times now. Once it was an older guy as the main character, but that didn't seem to work. So, I changed it to the younger kid, wrote for a while, and realized that I hadn't planned quite well enough. I bailed on it again, but knew I'd return. I think it might be time for that.

The main thing I needed to do was deeper, more in depth character bios. After flubbing that second attempt, I went and studied how to develop good characters, and I made up a document with dozens of questions that should be answered about a character before starting a story. That will surely give me enough work to write a bunch of words too.

So, it's going to be the adventures of the crew of the Cheshire Cat, and the third attempt at writing Prime. Let's see if I can get caught back up to the spot I should be in: 5,500 words. Sadly, that number keeps rising each day, unless of course, I make it smaller with the work I do each day.
Posted by Big Anklevich at 11:02 PM 1 comment:

This video cracks me up. There's been several times when I've gone to Target wearing a dark red shirt and khakis and realized that I look exactly like the employees. Imagine what it would be like with 80 people doing the same thing. Check out what happened at Best Buy...

Got this picture a few minutes ago. I looked up, wondering how much time I had before I had to leave for work, and realized that the moment had arrived. It was a mad scramble to get the camera before the minute changed, made worse by the fact that the reflection of the flash obliterated the first attempt. But here it is: After my successes of August and September, and my colossal failure in October, then arriving at and leaving behind my 37th birthday, I figured it was time to kick it up a notch.

Birthdays always tend to do that kind of thing to me. Like TMBG say, "you're older than you've ever been, and now you're even older." That's always true. You're not getting any younger, and your life is not getting longer (unless science-fiction replaces actual science sometime soon). So, if I want live my dreams, fulfill my goals, and fight off regrets, I'd better get started.

Starting November 1st, on which I wrote 322 words. No, that wasn't 500, but I was in the world's worst mood that night, and couldn't make myself do more. It hadn't worn off on the 2nd either. I didn't even try. Just spent the night watching soccer on TV.

It wasn't until this evening, when I forced myself to write, despite not feeling like it again, and found myself turning out 1,383 words, and enjoying every minute of it, that I finally got motivated. I could probably have gone on further, but I gotta be up early to work out tomorrow, so I'm going to get some sleep.