Rish was at a Star Wars panel at our local Comic Con a few weeks ago, and when they asked for questions from the crowd, a guy got up and prefaced his question with this statement:

"I just wanted to say that I love the prequels, and if anyone doesn't agree with that they need to grow up!"

A bunch of people cheered and a there were probably a few boos. Rish sat there a little stunned and incensed, and though he didn't have a question, he almost got up just so he could say, "I just wanted to say that Star Wars is just movies, and if anyone doesn't agree with that they need to grow up!"

It's kind of funny to me, because it's such a silly thing, but it's the first quarrel that I've seen between Millenials and Gen-Xers. There's been countless blog posts and Huffington Post articles about how Millenials are feuding with Baby Boomers, and as a Gen-Xer, I feel left out. It's just another time that we haven't mattered. Hell, they called us Generation X because they couldn't come up with a real name for our generation.

But now, we've got a feud! And I am firmly in line with my generation. I don't think I need to grow up for not liking the Star Wars prequel trilogy. They were awful. Some people on the old end of Gen-X also hated Return of the Jedi because they found Ewoks to be ridiculous. I guess I can understand how they feel a little, because everything Star Wars between 1984 and 2015 was absolute garbage.

So, this has become a long winded load of BS for a stupid payoff. But here it is: 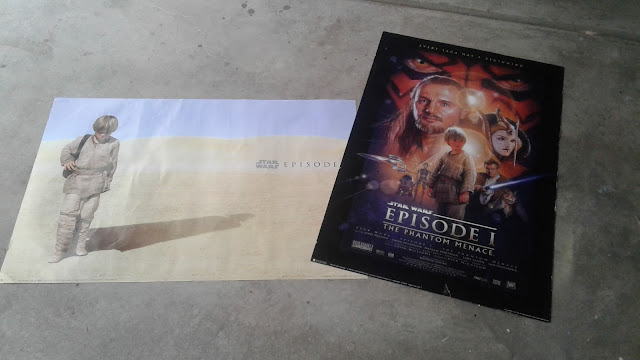 I found these Phantom Menace posters in the basement this week. We're getting ready for a garage sale, and I figured I'd put them up for sale. They're posters that I bought in 1999 before the movie came out. We were so excited about those films back in those days. I remember Rish Outfield nearly jizzed in his pants when he saw the shape of the shadow in the poster on the left. Should have known better, after all Lucas had already released those Special Editions of the original trilogy.

I thought, however, that I might be able to make double or triple off the posters if I put a sign on them that says: MILLENIALS LOOK!!! VINTAGE STAR WARS PREQUEL POSTERS! YOU LOVE THEM!

(If you don't want to buy them for triple the price, then you need to grow up).
Posted by Big Anklevich at 10:51 PM