So, I finished book two of The Expanse by James S. A. Corey. This one was called Caliban's War. 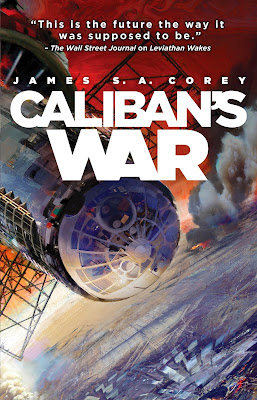 I don't get the reference from the title unfortunately. I know Caliban is a character from Shakespeare, because I looked it up. But I've never read The Tempest, or seen it or anything. Shakespeare wrote 38 plays, so there are tons of them out there that I don't know.

Then again, they are more likely referring to the Caliban from Forbidden Planet, a 1956 film. I've also not seen that...or at least, I don't remember it. I did see a lot of films in my time as a film major. I don't think that was one of them though. In that film, according to Wikipedia, Caliban is a monster created by one of the characters, and it ultimately rebels and tries to kill its master. That's much more fitting I think.

At the end of part one, we are left with some crazy events. It seems like part two should be dealing with the fallout that results from said events. Instead, they (meaning Daniel Abraham and Ty Franck, the two authors who make up the duo that is contained within the pseudonym James S. A. Corey) take the path that it seems like many people making series take. They leave the ominous stuff on Venus alone, and go into a sort of side adventure. Then, at the end, it seems obvious that they're going to be going back to that stuff in book three.

So, we're in part two here with The Expanse. And while it's somewhat related to the Protomolecule that was loosed in Eros Station in book one, it's not a straight up result of the previous book's events. Instead, there's a new person or group behind this incarnation. The incarnation of which I speak is a nasty, nigh-unstoppable space monster. Wait no, a whole group of them. Oh, crap, in fact somebody's building an army of them. As Dave Thompson, ex-podcastle enforcer, put it on Facebook: "Space monsters FTW!"

I have a really hard time writing about books that I've read. How much should I say about it? I don't want to spoil it for those of you who haven't read it, but I do want to be able to talk about things that happen in it, and give a worthwhile impression. Oh well, I guess I'll do my best.

What did I like about this book? It was full of interesting action. It was also full of interesting characters. I really enjoyed the new character additions of Chrisjen Avasarala and Bobbie Draper. Avasarala especially. She's an old woman, which doesn't seem like fodder for an awesome character, but the layers they gave here were really interesting. Avasarala has an unbelievably foul mouth, especially for a grandmother, and at first it seems like a random trait. In the end, you find out why she has such a foul mouth, and I'm glad they let us know. I wouldn't have figured it out on my own, and it made her character all the more deep to me.

Also, there was a scene from the book in which Avasarala makes the best use of the C-word that I think I've ever seen in any media. It's much better than J. K. Rowling's character from A Casual Vacancy, who just uses the C-word in a random, and unusual way. I mention this mostly because my partner in crime and podcasting, Rish Outfield, really loves the C-word. He doesn't use it a lot, but loves the power that it contains. He claims it is the most offensive word in the english language. I argued with him about that once, but I think I've come to agree with him. The F-word is just too overused to have the power it once seemed to have. Anyway, if you love the C-word too, then I recommend you read these books, so you can experience that scene. I won't even tell you what scene it is. I think you'll know it when you read it.

Avasarala is apparently poised to become a much bigger character. In the upcoming TV series; the first season of which is based on the first book, Leviathan Wakes; they are introducing Avasarala in the first season, even though she did not appear in the first book. That will be interesting. Also, the series is on Syfy, a regular cable channel. Meaning one that isn't allowed to just use whatever language they want to. It's not HBO, which can hide behind that pay-wall and say that people know what they're going to get, so the shackles are off. How they're going to play Avasarala's foul mouth, which is a very integral part of her character, will be very interesting. I hope they pull it off, and I'm not disappointed.

Anyway, again I recommend these books. The second one has been as wonderful as the first. The quality hasn't dropped in any way. It's becoming one of my favorites. I just listened to borrowed versions of the audiobooks, but now I'm trying to figure out how I can get my hands on some nice hardback editions of the books, so that I can add them to my collection along with all my other favorites. Unfortunately, that looks difficult to come by. I hope Orbit Books publishes a new hardback collection when the TV series comes out or something, like they often do with movies or The Game of Thrones.

Posted by Big Anklevich at 9:48 AM