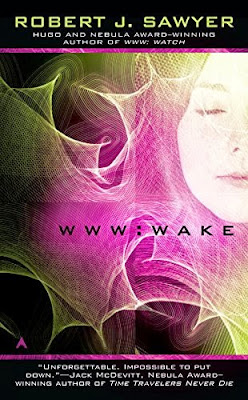 It was different than the space opera-type books I've been reading recently, like Leviathan Wakes by James S. A. Corey and Red Mars by Kim Stanley Robinson. Wake is a story about an artificial intelligence coming into being. It's the first volume of his WWW trilogy, which includes the books Wake, Watch, and Wonder. The other two are in my queue, and I'll get to the rest of the story eventually. I've got myself reading too many trilogies or series right now. I have to admit, the WWW thing, I think, is kind of cheesy, but it fits, so I guess that's fine.

Anyway, the book is about a girl named Caitlin Decter, who is blind. Her blindness has a rather rare cause. At the beginning of the book, she is approached by a Japanese scientist who has developed an experimental treatment for her particular form of blindness, and needs a test subject to try it out on. She agrees, and, by way of this experiment, becomes instrumental in helping an artificial intelligence that has been developing among the internet come to learn about itself, the world, and its place in that world.

The book was fun, incorporating a lot of the things that I've always liked about Rish Outfield's writing into this serious and significant storyline. Things like high school dances, teen love/heartbreak, and so on. Those kind of things that, no matter how old you have become, still seem to sit right there in the middle of your heart, which I suppose is why there's so many movies and books and TV shows and so on (video games, comic books, puppet shows) that have those elements worked into them.

I've heard that those memories, the ones from childhood through your teenage years, are the ones that sit right at your core. I suppose it's maybe because they're the first ones your brains lay down on the neurons. It's like when you make one of those soft serve ice cream cones. The stuff you put in last is what gets eaten first, and that first bit of ice cream is the very last thing to go. Even people like my dad, who is now almost eighty years old, still like to talk about their formative years, but if I ask him about the time when I was born...or any other time since then...well, he's kind of foggy on the details.

Anyway, I'm getting off course here. What I was trying to say is that I like to have my sci-fi draped in familiar trappings. It helps to make me understand and relate with it better. So, this book worked for me. I enjoyed it. And it ended, as the Ian Syndrome says, right where I wanted it to begin. Except that it was supposed to, because it's not really the end. It's only a third of the story. So, I look forward to the next one.

Oh, one other thing I wanted to mention. I listened to the audiobook version of this one, and they did something really cool with it at the end. There was a part where Caitlin is told to check out the words that a particular astronaut recorded and sent back to earth when he was on his visit to the moon. Sawyer, when he wrote the book, transcribed those words. But for the audio version, they actually got the original recordings, and cut them into the audio. I suppose that they are public domain, because I think anything generated by the government is, but still, I would never have thought somebody might do something like that. It's the kind of thing we'd do on the Dunesteef, but professionally produced audiobooks usually tend to shy away from Dunesteef-like things. I guess they're too afraid to upset those people who expected blandness in their audiobook. If it wasn't bland, they might not take a second drink. They might just walk away.

You know, it's like when you have a drink in front of you, and you think it's milk. And you bring it to your mouth without actually looking at it. You take a sip, and it's not milk. And even though it's Pibb Extra, which is really, really great. Because you thought it was going to be milk, it seems like the worst thing ever. Unless you have really great manners, you may actually spit it out all over the place. But, if you look down, and realize you drank from the wrong cup, and what you took was actually something really, really good. Then you can just enjoy it, and maybe broaden your palate.

I think the Dunesteef is one of those kinds of things. Something different enough that it only appeals to a small minority of the people who might otherwise enjoy it if it were packaged in a more familiar form. It's too bad. But the coolest things are always the things that are underground, not mainstream. So, I guess I can feel good about being cool, right? I am cool, right?

Anyway, I think I'm getting off course again. What I wanted to say was that it was really neat that they went the extra mile like that in their production. It gave the whole thing a bit of added worth in my mind. So, I guess I doubly recommend it.

It's a cyberpunk story, but it's not very cyberpunky, which is exactly how I like it.

Now it's back to Space Opera. My next read is part two of The Expanse. James S. A. Corey's Caliban's War. See you soon when I report on that one.