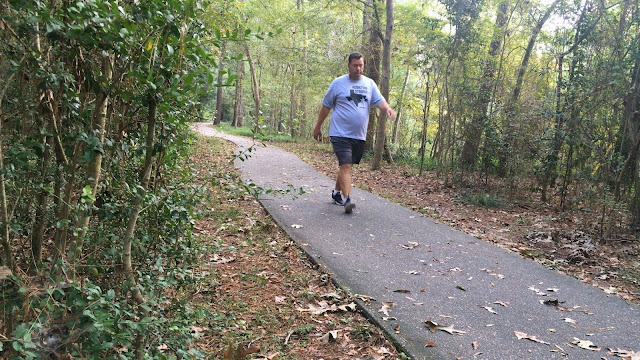 I decided to try something a little different with my walk today. Yesterday, after biking around with my son, I was looking at the map of the trails, and I noticed that there were some spots where I could make a loop, rather than just turning around and heading back to where I started from. I had to walk a little further to manage that, but not a ton further, so I gave it a shot today. 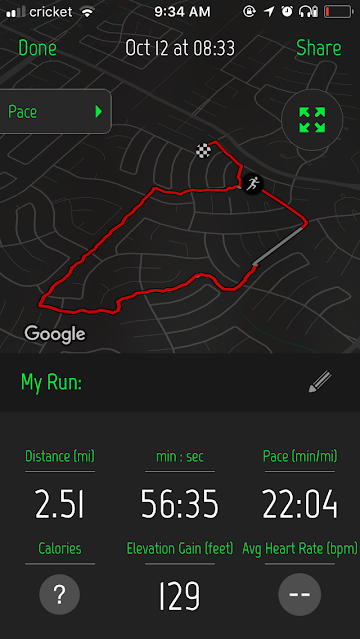 My runtracker app (I'm not even sure what it's called...the old program I used to use back in the day was called runkeeper, but that seems to have died off since I last did running/walking on a regular basis) was having some issues today. After the first mile, it told me I had been walking for 27 minutes...which I knew to be false, because I've never even come close to taking 27 minutes to walk a mile, even on my worst days.

Also, there's the whole segment where it seems to not even know where I was, and it just drew a straight line from the end of one reading to the start of the next. Maybe my GPS wasn't working well today or something. I think I actually walked closer to three miles today than 2.5, because Google Maps said that the route should be 3.2 miles long. I guess I could try it again on another day, and see how it goes.

After walking was yoga, here's me doing a back twist thing. I don't know if this position has a name or not. Rodney Yee doesn't call it anything like Warrior 1 or Mountain Pose or anything. 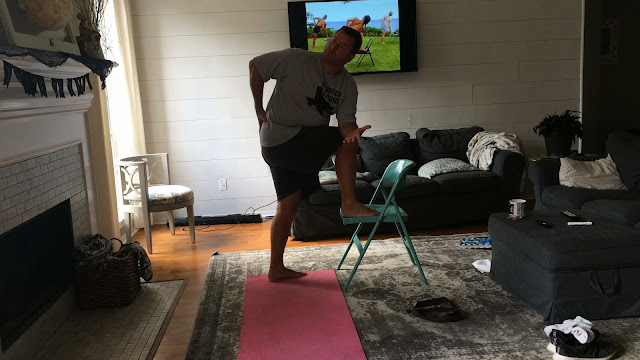 The rest of the day was pretty typical. I drank my water, a liter and a half of it was a Topo Chico that I got at the gas station on the way into work. Work was totally normal, and then I went home, and hit the sack. I slept well, though morning seemed to come earlier than I wanted it to. The daylight savings time changeover must be coming soon, because it's about pitch black at 7:00 AM when I wake up.

I got my son ready for school, then got dressed to go for my walk. I sat beside my bed to put on my shoes, and saw my book sitting there on my nightstand. Suddenly, I realized that I had just gone to bed last night without even thinking for a second about reading my book, or, for that matter, taking my progress picture.

Holy crap! I blew it! I forgot to read my book again. That's the same thing I did back on September 12th when I blew it the first time around, but that was only five days in. Now I was 28 days in when I blew it. That's a whole month of effort down the drain.

Now, to be fair, the effort is not down the drain. All of the benefits that come to a person when they eat right and exercise came to me for those 28 days. But, now I have to start over at day one, with 75 more to go in front of me. Do I still want to do this? I guess I'll have to think about that a little bit.