The Most Wonderful Time Of The Year

Over the last few years, I have acquired a bunch of Halloween related toys to use for sprucing up my den during the joyous fall season.

I have to admit, however, that this years I just didn't feel like putting them out. It was going to take a bunch of work, and nobody cares about Halloween this year anyway.

It's already been banned in all sorts of towns across the country, or just discouraged if the local politicians don't feel like they have enough of a mandate to ban it outright.

What is the point of putting up decorations? Just to depress myself with a constant reminder that Halloween is cancelled?

Some people along my street didn't have the same depression about it all that I did, and just went ahead and decorated for the season like it was 2019 or something. At first it didn't help much, but at last, my neighbor across the street put up one decoration that I liked so much that it made me want to contribute to the decorations.

I blogged about it at little, and said that if I did finally get around to putting up my decorations, I would post about it on here.

Well, last weekend, my family decided to put up the decorations for the rest of the house. They had a good time doing it, and it inspired me to haul my box of Halloween toys out of the closet, and start sifting through it. This is what I felt like:

Seeing all those toys again, remembering the way they spruced up my shelves last year, just made me happy. I couldn't deny them their place on my shelves any longer, so I got to work putting them in their place. It took me a whole week to get them all up, but here are the promised pictures I swore I would supply.

It's getting to the point that there are no spaces left for non-Halloween related toys during the Halloween season. I've bought a lot of stuff. The only thing that isn't at least Halloween adjacent in that picture is the scout walker. I wonder if I could come up with a way to make it scary. 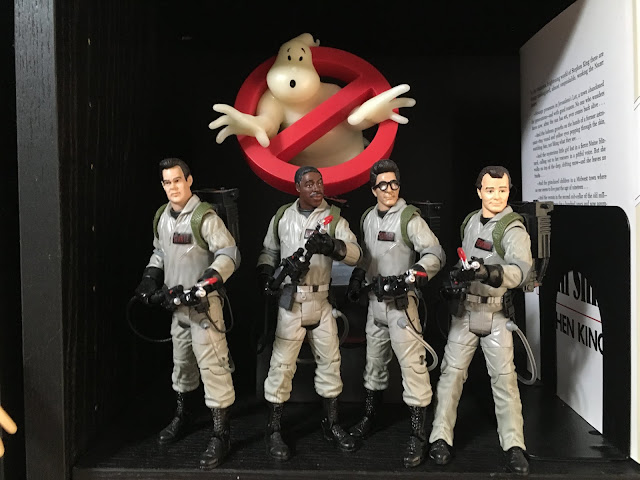 I put the Ghostbusters back on the main shelves. They used to be there all the time, but other, newer toys came along and superseded them. At least they fit in the context of Halloween. And that Ghostbusters symbol behind them is glow in the dark too. 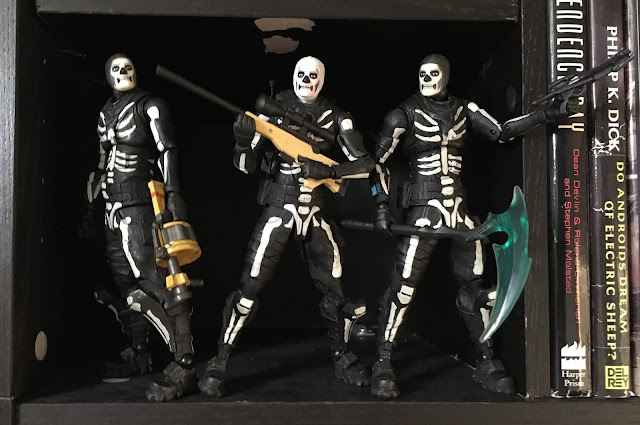 These guys are Fortnite toys. I don't play Fortnite. I never have once, but I love guys dressed in skeleton costumes. There were two kinds of skull trooper toys made for Fortnite, one that is glow in the dark and one that is not. The glow in the dark ones are the ones with the black heads, and the one with the white head is the standard issue. I decided to make a crew of these guys, and putting that crew together sort of gave me an idea for a novel. It's still in the germination stage, but now that I can easily write every day, I am certain that I will definitely get around to getting that story written someday. Eventually, you will hear me advertising on your Facebook feed or something about my new book, "The Skeleton Crew." 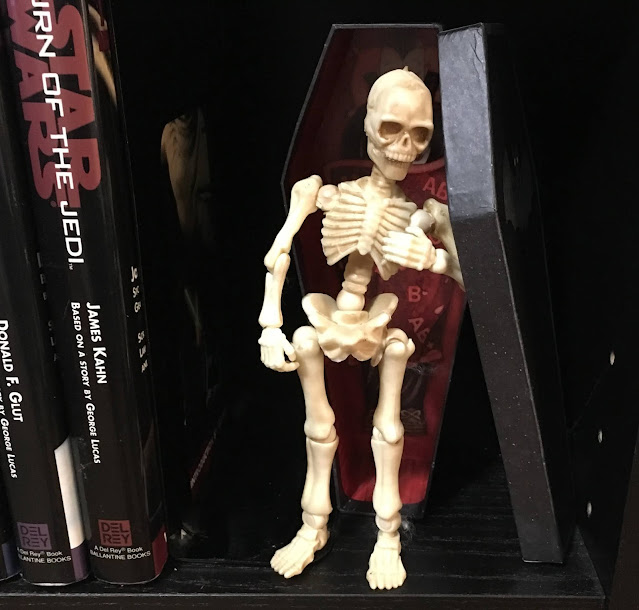 This one is new this year, or at least partially new. The dollar store had these little coffins available this year, and my son put this skeleton guy that I'd bought a year or two back together with it, which was perfect, because he's just the right size. 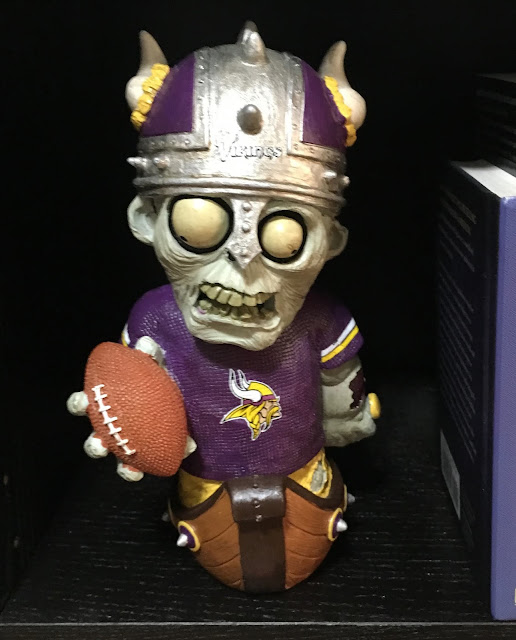 I got this zombie Viking as a birthday present from my friend. I believe he had already bought himself a zombie Packer, and liked it so much that he thought I would enjoy the Vikings version. 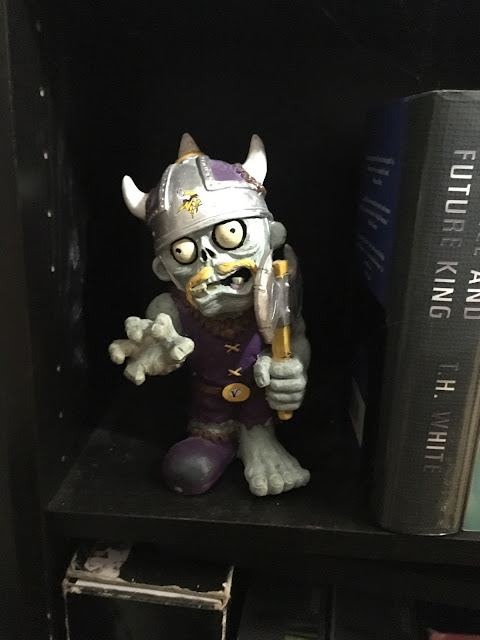 Funny thing was that a few days later, another zombie Viking arrived. When I asked him if he meant to do that, he said he had been ordering the first one, and his computer did something weird, and he assumed that the order hadn't gone through, so he came back later and ordered another when his computer was working again. He told me just to keep them both. I usually only keep one on the shelf at a time, but when Halloween arrives, there's no need to limit my zombies.

Here's another one of my divided shelves. At this point there's only one partition that still has regular toys in it. By next year, I bet there will be none.

This one has more spaces with non-Halloween guys, but it surely won't last long either. So many fun skull-faced toys. 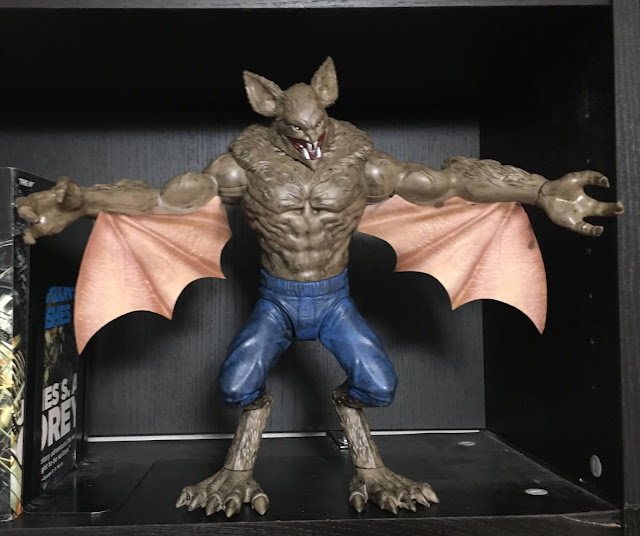 This is a gigantic Man-Bat from one of my favorite lines of toys, the Titan Heroes...although I think DC had some other name for the line which was totally forgettable. I love the toys, because they are usually super detailed sculpts, and if you have the time and patience, you can usually turn these very cheap toys into something that looks much more expensive. Man-Bat is a kind of silly Batman villain (as opposed to Condiment King who is legitimately menacing), but he looks good as a Halloween decoration...a kind of vampire bat-man of sorts.

I got Ghost Rider as a Halloween decoration originally, but the figure was so awesome, I decided to leave him up year round. I did move him over to this side of the room (the clean side, as opposed to the messy side on the other wall) during Halloween. My favorite part of this shelf, however, is Snake Eyes, who I replaced the head with a skull to turn him Halloweeny. 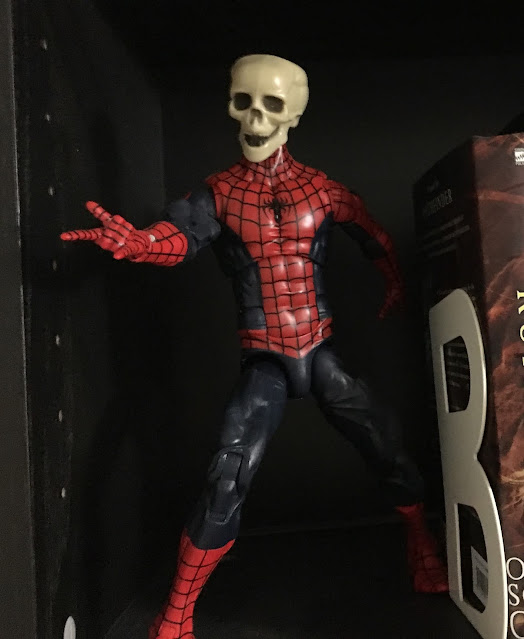 The skull on Spider-man here is from the dollar store. They came in a big bag of skulls. My wife used most of them to fill some jars in her regular decorations, but I thought they would look great in place of my larger figures' real heads. I like to try to come up with cheesy pun names for these ones. So, how about "The Skull-it Spider?" 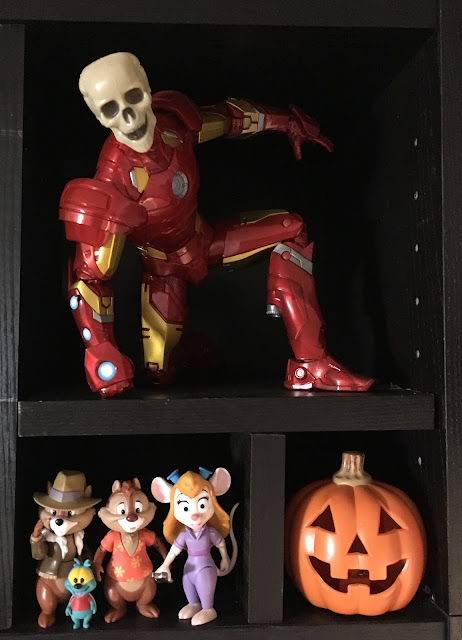 And this one is Iron Skull (yeah, that's taken by some version of Red Skull in an Iron Man suit, but I don't care. In fact, I like it better because of that). 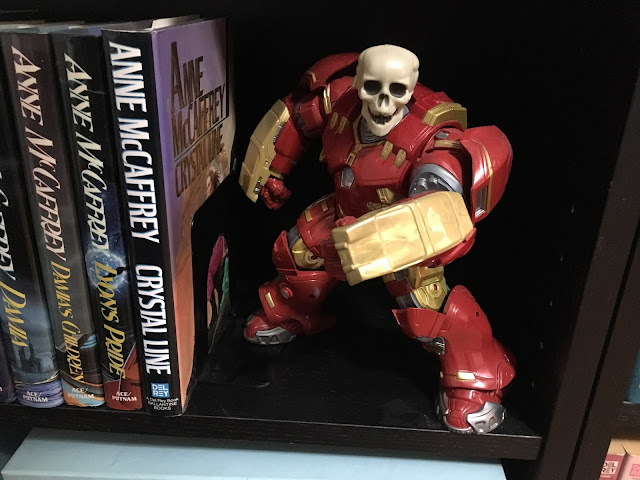 And this one is Skullbuster...another one that's already taken, but I don't care.

I also have a big Captain America that I put one of those skulls on last year, and named him Skull Cap, but he hasn't been on the shelf since the Fourth of July this year, and I don't feel like pulling anything else off to bring him in. Instead I used the other skulls on these guys. 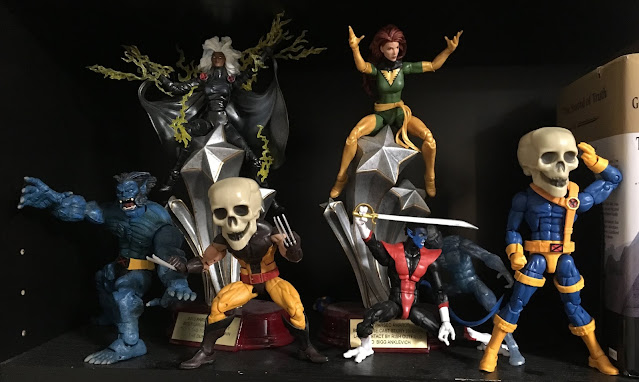 Yeah, I know, they're totally silly. The heads are about as out of scale as possible, but I still love it. Skull-clops and Skull-verine are having a good holiday this year. 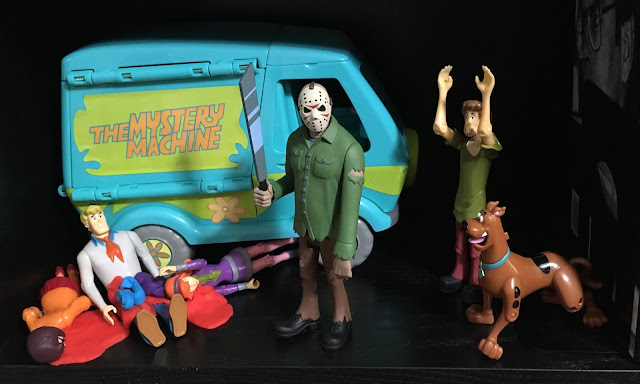 This one is one of my favorites that I put together last year. They came out with these cartoony versions of the most iconic scary movie guys, and called them Toony Terrors. I thought they'd go perfect with Scooby-Doo characters, so I made this Jason vs. the gang from Mystery Inc. For once, Fred, Velma, Daphne, Shaggy, and Scoob found a bad guy that they probably shouldn't have meddled with.
The blood and guts are made from Play-Doh. Might be funnier if I got some more realistic looking gore, but then again it might not. I like it the way it is. They're cartoon characters after all, they likely don't have realistic looking innards.

Lastly is this masterpiece. I made the two trees and the graves. The fog on the ground is from pulled apart cotton balls. Does it look like fog to you or just snow? I can't decide if it works or not, though I can't think of any other option to replace it with, so it likely doesn't matter.
These are Mythic Legions figures. I like to think that the story behind this is that the demon sorceress and her vampyre consort came to this graveyard and raised these skeletons from the dead to help them go forth and fight their enemies in yon castle. Now the Deadites roam the world. Where is Ash when we need him?
Thanks for running through my Halloween decorations with me. I hope you enjoy them at least half as much as I do.
Posted by Big Anklevich at 11:30 PM