This one is pretty different that the usual, however. 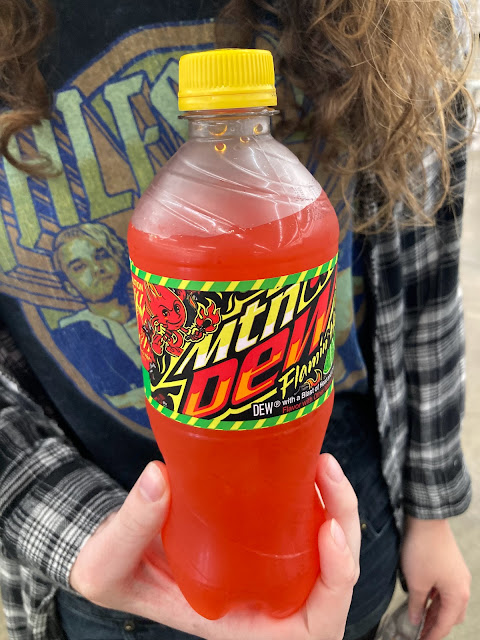 Sorry, that picture is twisted a little, so you can't see the name of the flavor quite right. The flavor is Flamin' Hot. Yeah, that's right, Flamin' Hot.

It is supposedly sweet meets spicy. It sounds gross. Flamin' Hot is the new hotness. They make it in everything...like the very popular Flamin' Hot Cheetos. But in soda?

Well, even though I don't drink it anymore, my daughter still likes Mountain Dew, so I figured I'd give her the chance to try it out.

She was skeptical, but took a sip. She thought it tasted okay at first, kind of like melon or something. I also offered my wife a chance to take a drink. She had a similar opinion.

Then, however, a few minutes later the Flamin' Hot part came through. Both of them started complaining that their insides were burning. They said it felt awful, like they were sick. They really, really hated it, and complained a lot.

We ended up dumping the rest of the bottle down the sink, because they said they wouldn't be finishing it. So, I guess we can say that it gets a thumbs down from my product reviewers.

I wonder what I would have thought if I'd tried it, if it had come out two months ago instead of now. I probably would have become hopelessly addicted to it, and spent all my time driving out to the store and buying it for myself. Good think Marshal and I did that 30-Day Carnivore Challenge, so I don't have to find out.