Back on the 17-19 of this month, the family and I went on a very short beach vacation to South Padre Island. Before we moved to Texas, we used to try to get away to San Diego every year in December. Now that San Diego is a prohibitively long drive away, we had to find somewhere else to go. South Padre Island is Texas's big beach destination, especially come spring break time. So, it was the logical place to go. It's also a few hours closer to us than San Diego ever was.

It was a quick trip. We were only there for one full day, driving half the day on Sunday to get there, and on Tuesday to get home. My wife just plain couldn't get the days off from work. But we had fun. Some highlights: 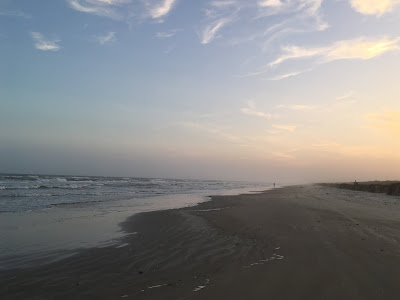 The beach was really nice, even if the water was too cold for me. 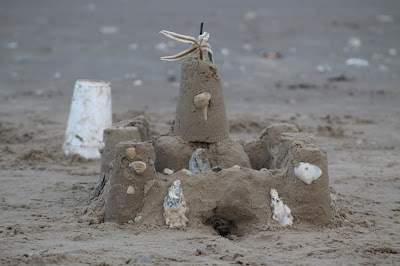 The kids made several sand castles, and had a good time decorating them with the many, many nice shells that were on the beach.

We went to the Point Isabel Lighthouse. 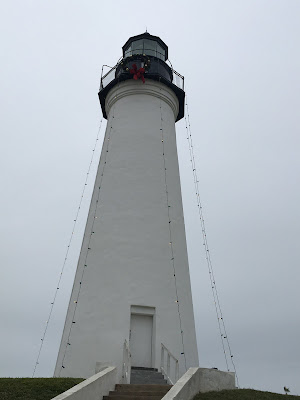 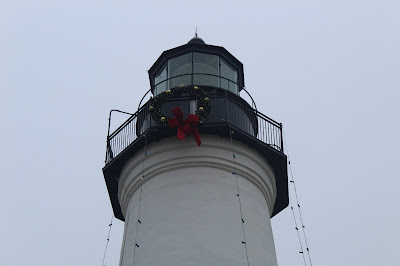 We went out on a dolphin watching boat tour. 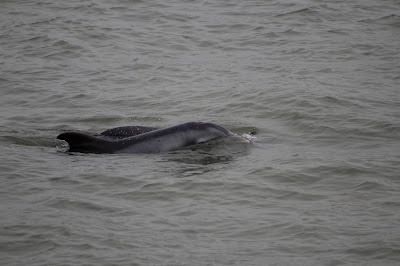 It was about a three hour tour. 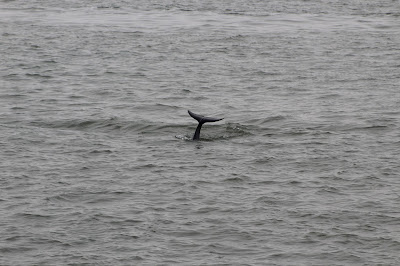 But the courage of the fearless crew made sure we got home instead of marooned for years on a desert island. 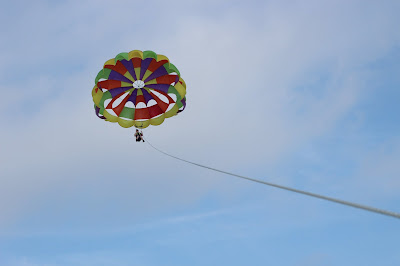 We took all of my older kids parasailing for their first time. It was their Christmas present for this year. 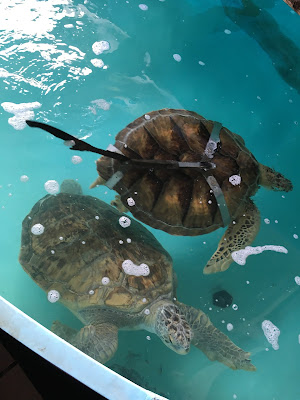 And we went to visit a turtle rescue place. Both of the turtles in the picture are missing limbs. The one on top only has one limb, and has to wear that prosthesis just to be able to swim upright and not drown. It was neat, but sad. 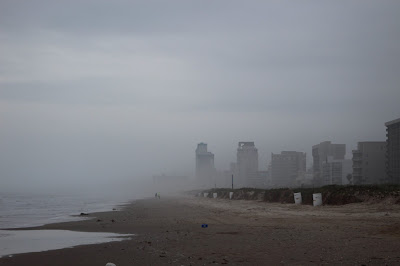 Despite being pretty warm, the beach was always foggy, making it look like some kind of post-apocalyptic world in all the pictures I took.

It was so bad that it looked like this on our last morning there. My son sent this picture to his friend: 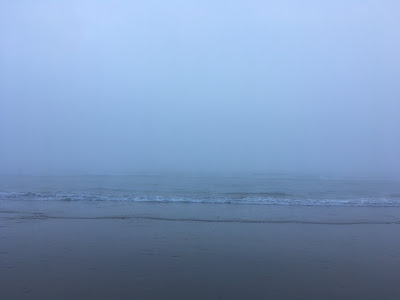 So, anyway, that was the beginning of our winter break this year. But back when we were trying to schedule our vacation in the first place, my wife proposed that we try to get the days off around New Year's Eve/Day because they would probably be in less demand than Christmas. Boy was she wrong. I was able to get them off, but she was completely unable.

So, I had them leftover now. I was off from Wednesday through Monday, a six day vacation with all my kids out of school, but no wife around. What should I do? I had enough time off that we could have done something really big, like drive all the way to New Mexico and go to Carlsbad Caverns, but that time off was smack dab in the middle of what is usually one of the coldest times of the year, so camping was probably out.

In the end, I decided to try to do a stay-cation. We could save money that way since we weren't renting hotels or anything, right? After all, we've lived here for such a short time that we are completely unfamiliar with all the local attractions.

We really like nature, its beauty and majesty, so most of our vacations are in places like national parks. So, I tried to look for things like that. However, those things tend to be best enjoyed in good weather. The only national parks in Texas are way over on the west side, but I found several state parks that we could go to. Plus, there were several other interesting things in town that we could see. Houston is the fourth biggest city in the country after all.

I decided to start with Battleship Texas and the San Jacinto Monument. Then, if we had time, we could go see a few other things nearby.

We headed out Wednesday afternoon, and immediately it started raining. The whole drive there the rain got progressively worse. I started worrying about how awful this was going to turn out to be.

The ship was very cool: 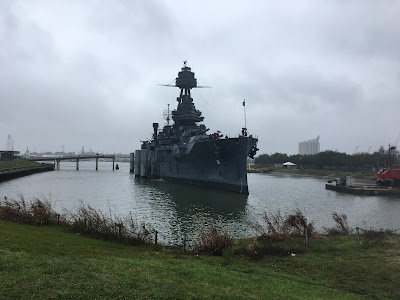 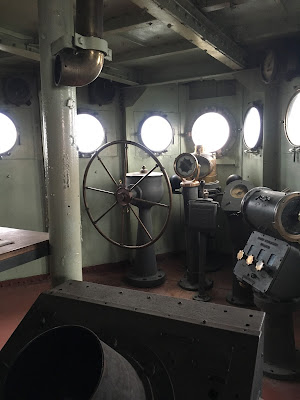 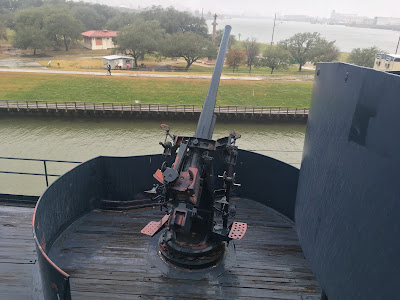 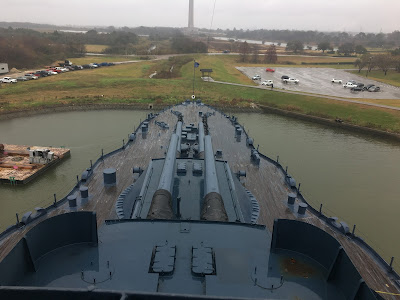 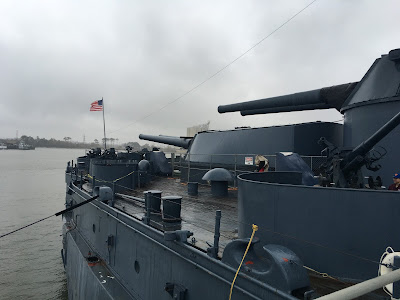 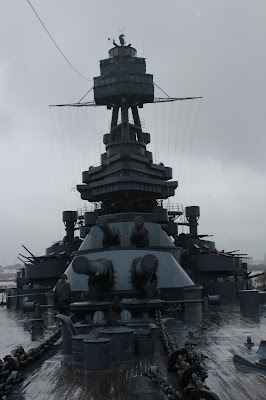 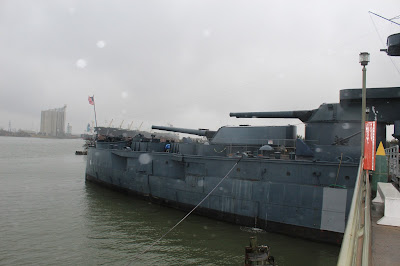 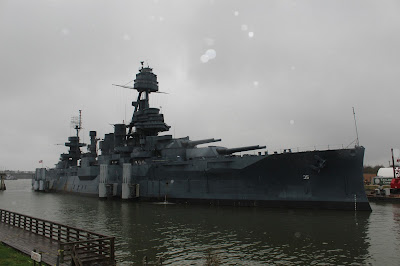 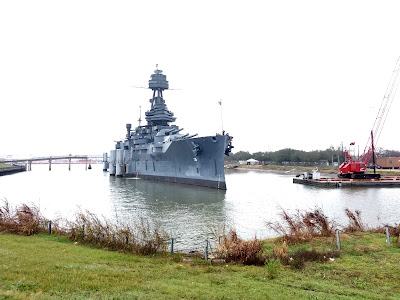 But our experience of it was pretty miserable. It was pretty cold, and very wet. The rain had made many puddles on the ship's deck that we had to step in to get where we were going, so our feet were soon wet. And battleships are made of metal, which gets as cold as the air around it, so everything you touched was very cold as well.

After the ship, which took a pretty long time to see everything on, we went across the way to the San Jacinto Monument. 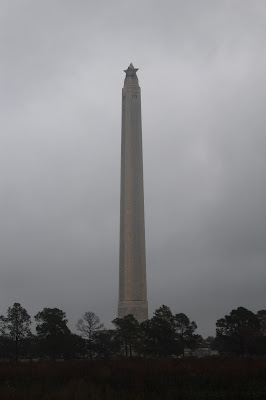 This is the monument that commemorates the battle that won Texas its independence from Mexico. On the site they built this gigantic white column. It looks suspiciously like the Washington Monument from Washington D.C. The only real difference is that there is a star on the top of this one.

We'd gotten a late start and taken a long time on the battleship, so everything at the monument was near closing time. You could ride an elevator up to the top of the monument and look through the windows in the observation deck at the top, but the elevator shut down operations at 5:30. We hurried to get on, but it turned out to be pretty unimpressive. In the Washington Monument, I assume you get an amazing view of all the other things on the Capitol Mall, however this monument just gives you a view of the more or less empty surrounding area.

There's a reflective pool, which on a day like this day was anything but reflective: 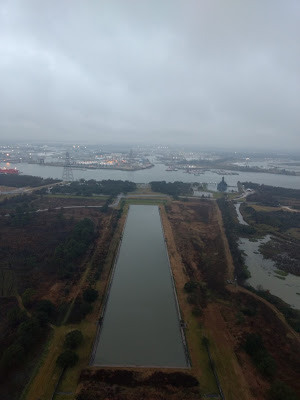 And then there were a lot of refineries and other industrial installations. 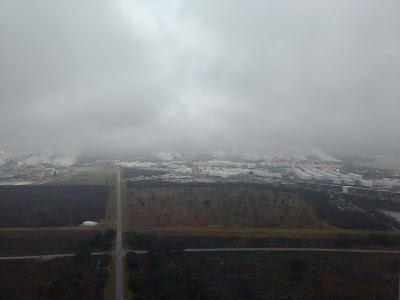 I guess we had to take the elevator up just to say that we had, but it was pretty expensive to do so, and not really worth the dough.

We were the last people in the observation deck, and took the last elevator down. By the time we got down to the bottom, even the gift shop had closed on us. We could only look at the historical items they had on display in the museum area. If you've ever been to a museum with a 5-year-old, you know how long that kind of stuff will entertain them. Soon, we hit the road.

I took one more picture on my way out, because they'd turned on the lights now. 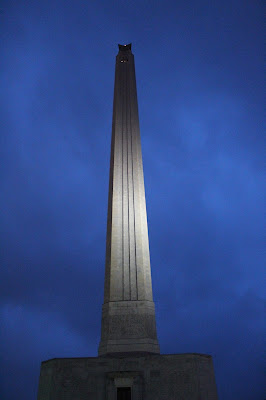 Aside from freezing our butts off, the day hadn't been that unsuccessful. The kids seemed to have had a pretty good time.

I decided that day two of the stay-cation would be in downtown Houston. I'd heard that one of the really tall buildings would let you ride their elevator up to the sky lobby on the 66th floor to get a really neat bird's eye view of the city.

I looked everywhere trying to figure out just which building it was, and finally found this entry on Wikipedia for the Wells Fargo Building:

The building's own website didn't say one thing or another about wether the public was allowed to be there or not, so I figured that whoever this guy was that wrote that line of the Wikipedia entry knew firsthand that it was allowed. 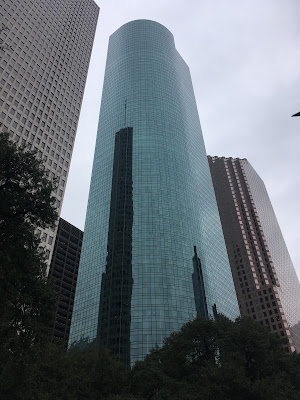 We walked to the building, and had all gotten inside the elevator before a security guard caught us, asked us if we were visitors, and then told us that visitors weren't allowed to go to the sky lobbies. I was completely livid. If I'd been there on my own, I probably would have been arrested after I completely lost my cool all over this security guard. But instead, I was there with my kids, so I just smiled and said, "oh, okay. Come on kids," and led them elsewhere.

Now that I'm not with my kids, let me just say FUCK WELLS FARGO! They are a completely shit bank. I was once their customer, but I was so glad to see the last of them. They did nothing but nickle and dime me for every kind of bullshit fee that they could. Every second my money spent in their bank was a second too long. Again, FUCK WELLS FARGO! I don't think they have any owning interest in the building either, but I don't care. It's got their name, so FUCK WELLS FARGO!

Okay, now that that's off my chest...I led the kids down the stairs into this really cool thing that they have in Houston. There are a bunch of underground tunnels that connect all the downtown building. They are finished up all nice and neat, and look just like a regular old hallway in a mall, but still I think they're cool. I assume they made them because it's usually too damned hot to walk from building to building out in the open air. The kids didn't seem too interested in them. Instead, they seemed uncomfortable and wierd. They didn't want to be there. I tried to take their picture, and they didn't want to pose for it. They just wanted out.

I realized that being told by the security guard that we weren't welcome had probably destroyed all of my day's plans. My older son told me that he felt like he didn't belong in the tunnels. He said it felt like he was walking through someone's office without being invited. What it really felt like was walking through an airport hallway or a mall, but it didn't matter. They were all squeamish.

So, the next chance we had, we went back up to ground level. We were close to city hall, so we stopped in the square there for a few moments to eat some snacks. 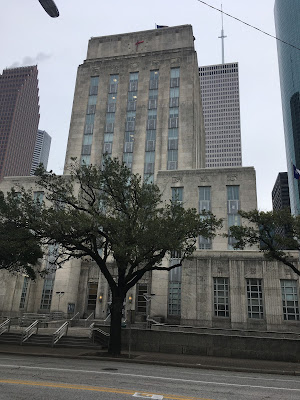 Still, however, the kids were acting weird and self-conscious. I took them over to Sam Houston Park, where there are a collection of historic buildings that you can look at. Apparently, you can get a tour of these buildings if you show up at the right time (and pay), but I hadn't seen that when I looked into it the night before. Instead, there was an audio tour that you could listen to with your phone. The kids thought that sucked, and they weren't impressed with the fact that you couldn't enter any of the buildings (I guess you only get that if you take the paid tour).

My oldest son told me that I'd done a poor job picking places to visit. The kids pretty much wanted to go home and call it a night, and frankly so did I. The experience had been super crappy. The highlight of our whole trip to downtown Houston turned out to be walking along the muddy, smelly buffalo bayou on the way to the Wells Fargo Building. 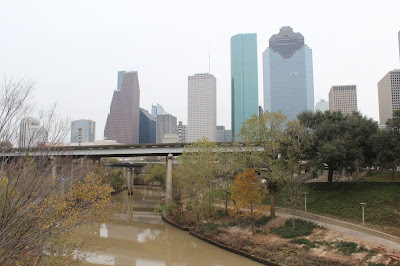 After that, everything went to hell, and I kind of wish I'd never even bothered. I decided to give the day trip, stay-cation thing a rest on Friday. Then, momentum, or the lack thereof, finished us off. We never went out to do another thing the rest of my vacation, and the stay-cation with Dad was proclaimed a complete failure.

Makes me think of my favorite Reel Big Fish song: