Juxtaposition. It's one of those words that I heard a lot in film school, but in the real world, people just say "next to each other". There's no fewer syllables in the single word than there is in the four word definition, so what's the point? I suppose it's nothing more than to make yourself sound intelligent.

So, anyway, I was listening to Pandora today, and was amused by the juxtaposition of two adds on the right side of my screen. Here they are: 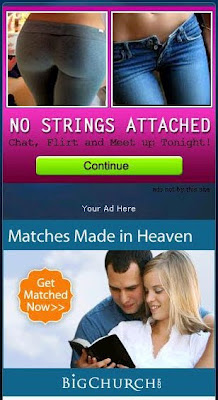 Yes, that is an add for booty calls directly above an add for the Big Church dot com dating service. I can't understand what circumstances might lead to such a juxtaposition of adds, but there it is nonetheless.

I can't help but chuckle at the utter wrongness of the image of those big round buttocks gazing down on the happy couple reading the Bible together. The crotch shot of the girl with her pants already half off right above the "Matches Made In Heaven" slogan. Tee hee. It's funny stuff.
Posted by Big Anklevich at 12:49 PM