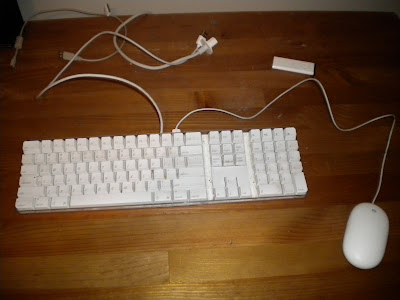 The podcast is going to be pretty late this time around.

For the last several months, I've been having problems with my computer. It picks the most inopportune times to freeze up and quit working. Usually it happens at least once while Rish and I are recording. It happened three times this Monday. Rish has been on my back to get the computer looked at and fixed. I didn't have the money to afford it, but, after getting our tax return back, I finally took it in.

My wife didn't appreciate the joke I made as I was packing the computer up to put it in the car.

I could hear my wife's disgusted snort from the other room. "Would you miss me that much if I was gone for a week?" She asked.

It was just a joke, just to be funny, but sadly, the reality is that the computer has become the hub that I revolve around, and increasingly that my family revolves around as well. We shut down our cable more than a year ago, and have done without TV for all that time. Instead, we get our TV shows from the likes of ABC.com or NBC.com or whatever. Besides that, we use Netflix. I've had to impose upon my friend, going to his house to watch TV every time something comes up that I don't expect to be able to see on the computer, like the Superbowl or the Oscars. Add to that the amount of time (the unbelievable amount of time) that I spend working on the podcast, and finish it off with the amount of time a normal person spends checking emails and surfing the net, and I hardly do anything that doesn't involve my computer. I'm like a friggin' William Gibson character, jacked in to my Ono-Sendai deck, and I don't even do that much compared to some real computer nerd types.

After giving my computer to the guys at the shop, and walking out the door without it, I had the weirdest feeling. It was almost like I felt when I dropped my kids off for their first day of kindergarten or something. It was really hard for me to leave my baby in the hands of someone else. What if they screw it up and I lose all my files? Have I backed up everything important? What if my computer comes back worse than it was before?

And what will I do for the time while it's away? They said there was a day and a half wait until they'd be able to get to it. I asked if I could bring it back tomorrow and still be in the same place in line, and they said no. It has to be physically there to be in line. Damn. I suppose that I'll catch up on a lot of reading (I've got two Scott Westerfeld books that I checked out from the library that I've been ignoring), and I'll watch some of the movies that I've been meaning to watch (on New Year's Eve, I borrowed about ten comic book related movies from my brother-in-law, and I still haven't watched them).

I also expect that I'll get that call on Saturday when they get to it finally, and they'll say, "We can't get it to crash at all. It seems just fine to us." Maybe computer mechanics aren't the same as auto mechanics, but I get that call every single time I take my car in to get fixed. It makes me scream.

"Come on, guys, the car overheats if you drive it for 5 minutes or less, how can you not get it to overheat?!!?"
Posted by Big Anklevich at 12:06 PM